Yikes!  Thought I was holding things together only to discover I hadn't written anything since the end of February!  And JD and I were in such a hurry to get out of town in Feb that I completely forgot to write about an unusual and fun tasting we attended at the Valencia Wine Company back on 2/6.  So here's a quick catch up, of sorts... 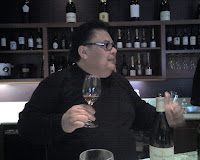 06-Feb-2010 - Exploring Georgia - Wines from the Republic of Georgia (the former SSR).  Guy LeLarge at the Valencia Wine invited Gregory Alonzo of Terrell Wines  (pictured, right) to bring in a selection of wines from the oldest wine producing region in the world.  Traditional Georgian grape varietals are not very well known in the West, even though there are some 500 to choose from, of which only 38 are available for commercial consumption.  Georgia is at the same productive latitude as France and Northern California.


Today, the most known wines exported from Georgia are Tsinandali and Kisi.  Both are semi-dry whites.  Tvishi, a semi-sweet white is also finding its way to Western tables.  However, the most extraordinary red is Saperavi, a semi-dry hardy grape.  Another sweet red, Kindzmarauli, has also begun to receive some recognition.

The most interesting part of the tasting were the wines made in ancient fashion - they were aged in amphoras or clay pots.  More about that later.

Let's talk about the wines Greg poured for us:

1.  2007 Teliani Valley Tsolikouri (dry white) - from the Lekhumi Valley, a region similar to Lake Country/Sonoma, with volcanic soils on the Black Sea.  Sweet, melony nose, very dry in the mouth, tasted like grapes (I know that sounds stupid, but it tasted like grapes). 13% alcohol.  $19.99

3.  2005 Rkatsiteli - This is the first of the amphora wines.  Amber in color, and crystal clear.  The color is from the clay pot.  No fruit in the nose; smelled odd, brandy-like.  Needed big food - lamb or pork.  Even though Greg said it didn't need decanting, I let it sit in the glass for the entire tasting and kept coming back to it.  Very interesting.  Not sure if I would actually want to drink too much of it, but it was definitely different from any other wine I've tasted.  Apparently, the clay pot wines age very well.  This wine improved a lot after sitting in the glass for over an hour.

4.  2005 Mtsvane (pronounced 'swani') - another clay pot.  The name means 'green' or 'fresh'.  More fruit in the nose; a bit more accessible than the Rkatsiteli. 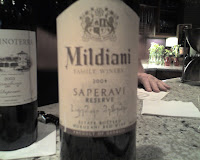 8.  2007 Teliani Valley Kindzmarauli (semi-sweet red) - light, fruit forward, very raspberry; too sweet for me, but several of the other tasters liked it very much.  $28.99

9.  2006 Khvanchkara - a sweet wine with a significant amount of French oak; that's all I could smell and taste, but other really liked it a lot.

A fascinating tasting!!  Greg was a treasure trove of information about Georgian wines.  He told us that Georgia is pronounced 'Gru-zha' and is probably originally a Persian word.  He also taught us how to say 'cheers' in Georgian:  Gomarjos!

For more information about Georgian wines, contact Greg Alonzo at greg@terrellwines.com
Posted by Goddess of Wine at 2:03 PM

Nice comprehensive tasting notes Denise, you did the tasting justice. Greg Alonzo is on Facebook - I hope you friend him and send him your review!