After a wonderful visit in SF with Wil and Joe, we packed our bags and hit the road south.  It was a beautiful morning, alternately rainy and bright; travel was moving well, and we were in Gilroy before we realized it.  Needed to stop and get some food, so we exited the freeway and found the Black Bear Diner, a fun, kitschy place with pretty good burgers (with flags!), and lots of strong coffee.

There was unintentional entertainment - a woman straight from a Del Shores play was in the next booth, reading a lengthy email about a spiritual intervention for some needy soul.  That set the tone - Texas accent and all - for the day.
Back on the road, refreshed and ready for wine, we were on our way to Cambria.


Stopped in Paso Robles to fuel the vehicle - much more economical than to gas up in Cambria, where gas can be up to 50 cents more than Paso or SLO.  Drove west along the 46, waving to our favorite wineries along the way.  Once in Cambria, we found Dennis of the Cambria Wine Shop sitting out front, enjoying the newspaper in the sun.  Cruelly, we forced him to step inside and pour wine for us.  And pour he did:

2004 Amarone Della Valpolicella Classico - Tommasi.  OMG.  Aged a minimum of 3 years in the bottle.  It wasn't in our budget for this trip, but OMG.  What a treat!!

As planned, Sara and Bill arrived around 5.  Dennis poured some wines for the unusually wound-up Sara, and Bill reluctantly left for an event he had to attend.  We chatted for a while, and suddenly, a waiter from Madeline's came over to tell us our table was ready.  That was interesting, as our reservations weren't for another hour, so I turned to Dennis and accused him of trying to get rid of us.  He said, "Well, yeah, I want to go home!"  So we bought 2 bottles of the Deep Sea and traversed the 10 feet over to our table.

After this delicious dinner, we drove south to Los Osos and unpacked at Bill and Sara's lovely home.  Bill arrived shortly after we did.  He opened a bottle of wine and we caught on events and family news and gossip.  Finally, off to bed.

Saturday a.m. up early, lots of coffee and a bottle of bubbly - WineShop at Home Grand Cadeau Brut - just to celebrate being together on a glorious Central Coast morning.  We all finally got our act together.  JD took the Explorer to go visit his dad and step-mom in Morro Bay, Bill headed outside for yard work, and Sara and I headed to San Luis Obispo for lunch and fun.

Sara took me to a lovely bistro called Novo, where we shared a bottle of Aneri Prosecco, some really wonderful food - I had the lamb kefta, and she had a salmon salad - and we sat for a couple of hours just psychoanalyzing our crazy family.  Well, her crazy family.  I mean, I'm married to the family, but they are really MUCH stranger than my own.  They put the 'fun' back in dysfunctional.  Anyway, we solved all the problems and went shopping.

While we were waiting for our table, we ran inside Central Coast Wines, where the lovely Dianna was happy to sell me a Le Cuvier red.  A charming store, full of wine and cheese and gifts.  I want to go back! 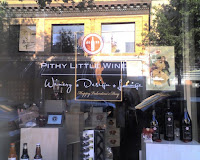 After shopping for jewelry and Valentine's gifts, we were heading back to the car, when I spotted a window with the legend "The Pithy Little Wine Company".  Well, of course, we had to stop!

We met the proprietors and winemakers, Jeff Munsey and Felicia Alvarez, tasted their 2006 Central Coast Chardonnay, 2008 Russian River Pinot Noir and 2007 Russian River Zinfandel, as well as their mulled wine, bought a bottle of the Pinot - light, young, kind of smokiness in the nose, cherry and spice in the mouth.  They were preparing for their grand opening the following week, and I'm sure it was fabulous.  If you're in SLO, make sure to stop by their charming store on Chorro Street.  They also make soda!

Sara and I finished running the errands we needed to run - Costco, Bevmo (for cigars, not wine) - and headed back to the barn where she and Bill made a huge and wonderful steak dinner for us.  Bill pulled a bottle of Silver Oak Alexander Valley Cabernet to go with the scrumptious dinner.  Just a perfect day!

Valentine's Day dawned bright and beautiful.  JD was surprised and impressed with the gift box I had previously sent to the house - full of dark chocolate and Pied Violet Reserve Cab.  We had our morning coffee and the four of us hit the road to the Paso Robles Rhone Rangers Experience at Vina Robles winery on the East 46.  On the way, Bill wanted to stop at Caliza Winery, maybe because he didn't realize how much wine there was going to be at the RR event.

Caliza is a fairly new winery, but they've been getting some good ratings and press.  JD and I were impressed with their 2006 Azimuth, an interesting blend of 51% Syrah/19% Grenache/14% Mourvedre/8% Tannat/8% Alicante Bouschet, as well as their 2007 Syrah.  Bill liked the 2006 Companion, another blend - 50% Cab Sauv/30% Syrah/10% Mourvedre/10% Tannat.  The winemakers here are thinking outside the box, and their results are delicious!  We bought a bottle of each and headed for Vina Robles.

I think Sara and Bill had never been to this kind of wine event, and they were blown away by the number of wineries and the selection of wines.  It was a great event, and we got to sample some wines we didn't know, meet up with winemakers and reps, and just generally have a fun, wine-soaked afternoon.  My notebook is literally wine-stained after trying to take notes on the lush Rhone varietals.  Adelaida, Cass, Clavo, Clayhouse, Derby, Edward Sellars, Halter Ranch, Venteux, Thacher, Ecluse, Austin Hope (Hope Family Wines), Terry Hoage, Tablas Creek (of course), Ortmann, Mitchella, Lone Madrone.  That's just a partial list of the stand-out winemakers there.  I was personally gratified to be able to talk with Kenneth Volk, Terry Hoage and Jason Haas.

We met up with Sara and Bill's friends, Joyce and Bill, who had gone to the wine tasting seminar and lunch earlier in the day.  The six of us had reservations at an Italian restaurant in Morro Bay, but it was still early, so we headed to Joyce and Bill's home in Morro Bay - right on the beach.  We opened the bottle of Caliza Companion and paired it with Joyce's quickly whipped up sauteed mushrooms, cheeses and veggies and tapenades we picked up at Trader Joe's on the way, and watched the sunset.

From there we headed over to Giancarlo's in Morro Bay.  It was Valentine's Day, so they had a limited, special menu for the evening.  We opened a bottle of Daniel Gehr's Sangiovese that we had purchased in Los Olivos, but we were all actually wined-out by the time the food came.  Even with six of us, we left wine in the bottle when we left the restaurant.  Everything was delish, we were exhausted, and we'll have to go back to Giancarlo's to find out what else is on the menu!

Monday morning (President's Day holiday), we quickly packed up and took our leave so that our gracious hosts could return to their lives.  We headed north back to Cambria and settled in on the deck at the Moonstone Beach Bar and Grill for brunch.  We cracked a bottle of Mumm Napa Brut Prestige to pair with fried calamari and a French dip sandwich, and watched the high surf.

We walked along the boardwalk and just stood and watched the waves and the white water and the seals, and talked about our goal of moving up there.  We popped back into town to say adieu to Dennis and grab another bottle of Deep Sea, as well as a bottle of Saint-Hilaire Crement de Limoux, and sadly headed for home.