Yeah, yeah...I'm complaining because I'm still way behind.  I haven't told you about the delicious wines from Dutcher Crossing in Sonoma, or the charming couple who grow and make the noteworthy Laraneta wines from Paso Robles.  And I haven't written about the Napa Nightlife event from LearnAboutWine at the Elevate Lounge downtown, so all those columns will be coming up shortly, but I really felt that I needed to tell you about the truly fun tasting I did on Saturday afternoon, where I participated in the Rhone Rangers Grenache tasting event -- from my living room! 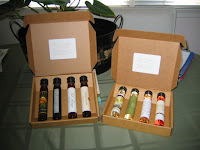 I couldn't make it to San Francisco for the event - having limited time to travel due to the day job (and very grateful I am for the day job!) - I have to pick and choose what events I can get to.  So being a big Rhone Rangers fan, I was elated to discover that a wine company known as BrixR was offering tasting packs (shown right) for a special Grenache tasting!
This was how the event was described: 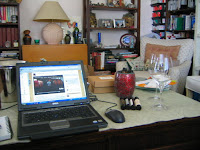 Saturday, March 27, 2010 2:45 PM – 4:00 PM. Seminar #2 : Grenache, Red, White and Pink! - Grenache, the worlds most widely planted grape for red wines, is most often used as the backbone of red blends.  Now Rhone Ranger winemakers are beginning to produce Grenache as a single variety red wine (and sometimes as a rosé), and having dramatic results.  As a red wine, Grenache can produce flavors of ripe bing cherries, gingerbread, coffee and roasted nuts.  Grenache made into cool, dry rosés, makes a lovely summer wine.  Grenache Blanc produces a wine with lower acid and notes of citrus and herbs.  Participating wineries include: Curtis, David Girard, Edward Sellers, Katin, Quivira, Sol Rouge, Stage Left, Tercero and Unti.  Come join us as we explore Grenache, from white to red.  This event takes place at the cozy and charming Fire House at Fort Mason on the San Francisco Waterfront. Live simultaneous video broadcast for a unique taste-at-home experience will be produced by BrixR.  Moderated by Jon Bonné, San Francisco Chronicle Wine Editor.

These were the wines - I was tasting two by two, and writing as fast as I could while the winemakers spoke:


2008 Tercero, Grenache Blanc - Introduced by winemaker Larry Schaffer. Larry is not only making great wine for Tercero, he is also the assistant winemaker at Fess Parker and Epiphany.  The grapes for this wine are from Santa Ynez, where the soil is sandy loam, the days are warm and the nights are cool.  Larry tries to keep the very tannic Grenache skins away from the juice, so his results are crisp and clean with a mouth feel similar to Sauvignon Blanc.

2008 Katin Cellars, Grenache Blanc - Winemaker Jason Kahler spoke eloquently about his wine, sourced from the Templeton Gap in Paso Robles.  Nice ripeness from the warm days with nicely retained acidity from those cool nights.  He keeps the juice sur lie (on the lees), adds a bit of oak, and comes up with with a soft gold, fresh, lemony, honeyed wine with a smooth, oily texture and crisp finish.

2008 David Girard, Grenache Rose, El Dorado - Winemaker Mari Wells introduced her Rose blend of Grenache, Mourvedre and Counoise.  Really bright watermelon and cherry balanced with juniper and pine.  This wine is specifically designed to be Rose.  A pretty deep pink color and watermelon nose reminded me of a still Blanc de Noirs - in a good way!

2009 Unti, Rose, Dry Creek Valley - Owner/winemaker Mick Unti makes his Rose from grapes grown up in Dry Creek Valley.  He's got 60 acres of Grenache using 2 clones from Tablas Creek and 1 from John Alban.  Pale, pale orange in color, gorgeous floral nose, with a crisp minerality.  Of all the wines I tasted that day, I felt that this one needed food to bring out the best in it.

2007 Edward Sellers, Grenache, Paso Robles - Winemaker Amy Butler praised this huge Paso wine, saying that Grenache likes the heat in Paso.  This Grenache had 7% Syrah, and altho that doesn't sound like much, it was literally all I could taste and smell.  The wine was very spicy and fruity, with an odd Worcestershire Sauce tang in the nose.

2006 Stage Left Cellars, Grenache - This wine was my favorite of the day.  Rick Williams spoke about the wine, but Melinda Doty was online with the computer geeks.  This wine sources from Santa Maria, specifically the area around Bien Nacido, and the winemaker is very influenced by John Alban in a geeky and passionate way!  Lovely drinking wine - fruity, spicy, black pepper, juniper.  After being open for a while, the nose was full of maple and caramel.  My notes say "WOW".

2006 Sol Rouge Grenache - Winemaker Bryan K (never did get his last name, and it's not anywhere on the Sol Rouge site or their Facebook site) does 3 different Grenaches.  This one is 100% Grenache aged in neutral French oak up in the Red Hills district.  At 1700 feet, the days are warm and the nights are cool.  There's a trend here, in case you haven't noticed.  This wine is delightful.  Was that coconut in the nose?  Maybe.  What I loved about it was the spicy, cinnamon-y finish.  Delish!


Assisting Jon Bonné were the staff of BrixR, especially Noah Dorrance, who acted as the moderator for us online geeks.  It was extraordinary to be chatting online with other wine lovers from all over the country, while the winemakers in San Francisco discussed how they made these wines, offered their opinions and thoughts about winemaking, and just generally provided an interesting and instructional view of growing and designing Rhone varietals in California.  Did you know that Grenache is the second-most planted grape in the world?  It's planted everywhere!  It's the heart of Chateauneuf-du-Pape, and a premium grape in California.

I do have to say that those of us online were blown away by both the Stage Left Cellars and the Sol Rouge.  Their wines were just beautiful, and I had to stop myself from finishing the wines, as I had promised JD that I would re-bottle the remainders so he could do his own tasting later!  The sacrifices I make!!