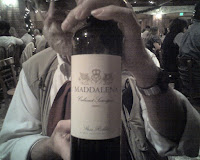 JD and the Goddess of Wine had last been at the historic San Antonio Winery in the heart of downtown Los Angeles back in 2009. That visit had turned out to be quite serendipitous when we met Santo Riboli, who took us on a personal tour of the winery, tasted us through the current releases, and sent us home with some lovely wines. Over the following few years, we had the opportunity to work with family scion Michael Riboli at various events and wine festivals in the greater Los Angeles area.

This time, we were invited to join winemaker Arnaud Debons for a private barrel tasting. We were joined by Public Relations Manager, Melissa Gonzalo, and the charming Augustín Durán of Hoy Los Angeles, the Spanish language version of the Los Angeles Times.

A bit of California history: Winemaking in California began with the Franciscan monks who used native grapes as well as some Spanish varieties to make wines used in the Missions, hence the rise of the "Mission" grape, which made a foxy (not a good thing) and not very tasty wine. In 1833, French winemaker Jean-Louis Vignes brought the first European vines (vitis vinifera) from his native Bordeaux, planted them in downtown Los Angeles and built a winery. The aptly named Vignes, considered to be the father of California’s wine industry, has a street named after him. The wine industry grew to become an economically significant industry in Southern California. By the 1880s, Los Angeles was the top California region for grape growing and winemaking, and within another decade vineyards were planted and producing in Orange, San Bernardino, and Riverside counties. 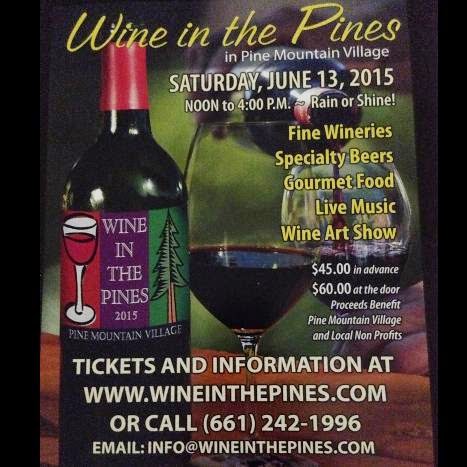 Wine in the Pines 2015:
Sipping, Sampling, Listening and Perusing In The Woods

PINE MOUNTAIN CLUB, CA - Can you imagine leisurely sipping wine and sampling gourmet food while listening to live music and perusing an art show – in the woods? And that scene will unfold just an hour or so north of Los Angeles in Pine Mountain Village at the top of the 5-freeway known as the grapevine. The festivity takes place on June 13 from noon to 4:00 p.m. Many of the guests that have come to Wine in the Pines for over a decade have discovered an oasis of fresh air, cabins, pine trees and wine lovers. Come see what all of the talk is about and join us for this year’s event.

“Seeing the wineries participating this year promises it to be one of the best wine events ever,” Mark Bailey, owner of the local Madd Bailey’s Pub and the Wine Room Gallery said. “I’m especially excited to see a special section of the village devoted to the fabulous Lompoc Wine Ghetto Trail.”

A great tool for winetasting!