Cool news from Viña Montes and the Cystic Fibrosis Foundation!

LOS ANGELES, Calif. (August 27, 2012) – This September, Viña Montes and the Cystic Fibrosis Foundation invite wine lovers to turn a great summer wine purchase into a charitable donation during their month-long ‘Angels in Action’ fundraiser. Viña Montes, the world-renowned Chilean winery helmed by winemaker Aurelio Montes, has partnered with its distributors in nine states across the U.S. to donate 10 percent of proceeds from every bottle sold from September 1–30.
“We believe Montes has been helped by many guardian angels since we started the winery in 1988,” says Aurelio Montes. “With ‘Angels in Action’ and our ongoing partnership with the Cystic Fibrosis Foundation, the goal is to now be ‘angels’ for others—and to reach beyond our own donation capacity to motivate fans of our wines to help support our efforts.”
‘Angels in Action’ is a joint effort with Montes distributors in nine states: California, Maryland, Washington D.C., New Jersey, Pennsylvania, Delaware, Connecticut, Massachusetts and Florida. Viña Montes and the following distributors will each donate 5% of their September wholesale sales, for a total 10% donation:
Aurelio Montes hosted a ticketed tasting event in Los Angeles on June 7th to announce “Angels in Action” and commence its fundraising efforts; all proceeds from the event were donated to CFF. See clips from the event and learn more about “Angels in Action” at http://youtu.be/tIVDkLUeX9E
Media queries and image requests should be directed to Michelle McCue, michelle@mccuecommunications.com.
About Viña Montes:
Founded in 1988, Viña Montes is the brainchild of Aurelio Montes and Douglas Murray, both veterans of the wine industry. Along with partners Alfredo Vidaurre and Pedro Grand, they created Viña Montes with the goal of elevating the quality and reputation of Chilean wines - both in Chile and around the world. In the quarter century since, Viña Montes has played a pivotal role in enhancing awareness, affinity, and acclaim for Chilean wines in more than 100 countries worldwide. In essence, Viña Montes has become the benchmark for premium Chilean wines.
About Cystic Fibrosis Foundation:
The Cystic Fibrosis Foundation is the world's leader in the search for a cure for cystic fibrosis and funds more CF research than any other organization. The Foundation's pioneering and successful approach to the development of new drugs for cystic fibrosis has been featured in some of the country's most prestigious and influential publications.
Distributor Partners:

Tasting Australia and New Zealand...with the Goddess of Wine! 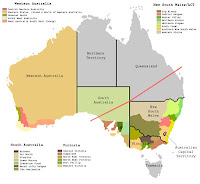 Yes, indeed, it's the next wine class with me, the Goddess of Wine!

Join Denise Lowe, the Goddess of Wine, as she takes you on a tour of the wine regions of Australia and New Zealand - and you never have to leave your seat!

The class includes generous tastes of delightful wines from all over Australia and New Zealand, plus tasting notes to take home, large quantities of laughter, and yummy snacks provided by Fab's!

$45 per person gets you a great time on a Saturday afternoon.

Reservations are required as seating is limited! Get your seat today!

Posted by Goddess of Wine at 1:42 PM No comments: