Wining away the day in the Santa Ynez Valley...

The Goddess of Wine and JD headed for the wilds of Lompoc recently, ostensibly to pick up wine at Clos Pepe, but also to spend a bit of time in the vineyard with that Renaissance man, Wes Hagen and his trusty assistant, Andrew Turner. It was a beautiful day, sunny and breezy, and Wes and Andrew walked us through winter vineyard management and a demonstration of how to prune a grapevine, during which we learned a new word: phloem. In vascular plants like grapevines, phloem is the living tissue that carries organic nutrients, especially, sucrose, to all parts of the plant where needed. So when you prune a vine, you are looking for the center of the cane to be green and alive; this is the phloem, which ensures that the vine continues to live through the winter.

Wining by proxy with the STARS of Santa Barbara...

The Goddess of Wine can't always report on events, so First Acolyte, JD, steps up to taste his way through and report to you. This edition of Ian Blackburn’s LearnAboutWine/WineLA Santa Barbara STARS event again supported the T.J. Martell Foundation and this time was presented by RBC Wealth Management. These events offer a nice sampling of wineries of a region and include small and/or new wineries.

The Goddess of Wine was helping pour for one of these small excellent wineries (Shai Cellars) for both the trade and consumer portions and could not get out to taste too much. I attended the evening consumer portion. It is impossible to taste everything and then do any justice to all the wines, so I mainly concentrated on wineries new to STARS. And some friends' wines as well (wink, wink). 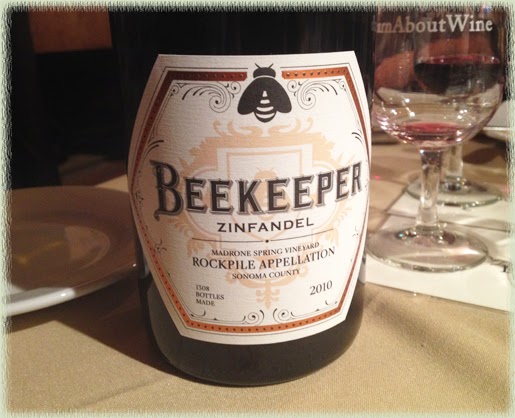 The Goddess of Wine and JD attended the annual release of Beekeeper Cellars Zinfandel, this being the release of the 2012 vintage. Proprietor Ian Blackburn of LearnAboutWine and the new wineLA, teamed up several years ago with old friend and brother in wine, Clay Mauritson, to make the very best Zinfandel possible. Ian thinks of Zinfandel as California's grape, an intrinsic part of the history of winemaking in California, and he brings his passion to fruition.

The event at Josie in Santa Monica featured a vertical tasting of all the Beekeeper vintages, from 2009 to 2012, during which Ian recounted his education in winemaking, vintage by vintage. Four of the five wines we tasted came from the Madrone Spring Vineyard in the appellation known as Rockpile, owned by the Mauritson family, situated at the Northwest edge of Dry Creek Valley. All of the vineyards within the Rockpile AVA range from between 800 – 2000 ft. in elevation. Although Rockpile is located just 13 miles from the coast, Lake Sonoma provides an inversion layer that prevents the heavier fog that typically blankets other Northern California appellations, allowing for longer, more consistent sun exposure. Moisture and daytime temperatures are regulated by coastal breezes, and in many cases, steep slopes and rocky terrain require manual vine management.

Wining into the New Year...

After a spectacular case of the flu, the Goddess of Wine and JD are creeping back to health. 2015 started so badly, I have every expectation that things will improve! In the meantime, life - and wine - goes on. This year the plan is to start/finish clearing out the house, sell it, move to the Central Coast, and fully enjoy the wine-y life.

Towards the end of 2014, I was hired by Fab's to assist with choosing wines for their somewhat depleted list. This has been a good learning experience about how to determine what wines will sell for 'happy hour' as well as what will pair best with the standard and special menu fare. It has also provided a great opportunity to taste some wines that don't usually cross my path.