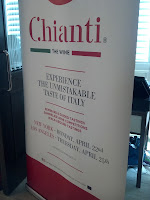 The Goddess and JD were invited to a special tasting event. The Consorzio Vino Chianti was coming to town! We met at the luxurious Mr C Hotel in Beverly Hills for a special seminar with C. Scott Carney and the Consorzio staff where we tasted through 9 wines, were tested on knowledge and palate, and then fed in a most delicious fashion, after which most of us trooped upstairs for a trade tasting of delightful Chiantis and Vinsantos looking for distribution in the US.

From the Consorzio's website: The Chianti Wine Consortium was established in 1927 by a group of wine growers from the Provinces of Florence, Siena, Arezzo and Pistoia, and later expanded its operations to include the entire production region. It was legally recognized by the Production Regulation of 1967, and incorporated into the Denominazione di Origine Controllata e Garantita (Controlled and Guaranteed Denomination of Origin – DOCG).

Over 2,500 producers, cultivating more than 10,500 hectares of vineyards and producing 550,000 hectoliters of Chianti, are protected by the Consortium which, due to its tradition of representation and operations, has been appointed as the official monitor of Chianti by the Ministry of Agriculture, Food and Forestry Policies (MIPAAF) by the ministerial decree of 22 May 1978, which was later reconfirmed for the other denominations within its sphere of responsibility in 2003 and 2004, and whose members receive the same representation.
Read more >>
Posted by Goddess of Wine at 12:00 PM No comments:

The Goddess of Wine missed another great tasting, but luckily her hardy acolyte and staff writer, JD, was able to attend. The Goddess is sad that she couldn't taste these wines! Here's the report from JD:

Jeff Welburn is the Owner and President of AWA, and the Jeff Welburn Selections (JWS) are the French import section of AWA. AWA has a very broad portfolio of wines, foreign and west coast. There is something there for everyone. I’ll just hit some highlights.

On entering I was pleasantly greeted immediately, checked in and given a preprinted name tag. Picked up the program booklet and a glass and started in with a sampling of Rosés.

Wineaux of the Goddess...Argentina Edition... 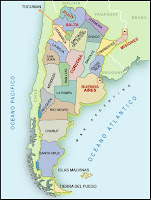 All of a sudden it was April! The Wineaux of the Goddess Chowder and Marching Society met at the fabulous FAB's to taste and discuss wines of Argentina. No restriction was made regarding white or red or region - except NO Malbec (having done a Malbec tasting last year), and our delightful assistant, Amelia, made sure the whites were delivered to us first, followed by the reds. Tasting was done blind, with the reveal at the end.

Some background on Argentina, the 5th largest producer of wine in the world. As with some aspects of their cuisine, Argentina has its roots in Spain, who colonized the Americas back in the mid-1500s. The most important wine regions are Mendoza, San Juan and La Rioja. Salta, Catamarca, Rio Negro and Buenos Aires are also producing wines. Mendoza produces more than 60% of Argentine wine and is the source of the highest percentage of exports. Due to the high altitude and low humidity, Argentine winemakers rarely face the problems of insects, fungi, mold, and other grape diseases that affect other countries. This allows cultivation with little or no pesticides and a large number of organic wines produced.

Argentina has also become THE place for Malbec, formerly thought of as a French grape, and other traditionally French and Spanish grapes do extremely well there. Torrontés, an aromatic, moderately acidic grape has come to the forefront of white wines made in Argentina.

Wining in Ventura County...It's not a back up plan...

After a short discussion about whether to clean out the office or go wine tasting, we agreed that we'd play on Saturday and clean on Sunday, so off to Ventura we went. Our goals for the day: Drop off a bottle of JD's own newly-bottled experiment (tentatively named 'ZinDickTive') to friend and consultant, Gary Stewart at Four Brix, check out new winery, Plan B Wine Cellars, and finish up at old fave, Cantara Cellars.

After a laborious drive - unusual for a Saturday - we arrived at Four Brix and were delighted to find the Stewarts, Gary and Karen, manning the tasting room counter. We caught up while we tasted. The topic of Plan B came up - the Stewarts told us we had to go there, and were happy to hear that it was already on the agenda. After tasting through the lineup, and getting some special tastes of not yet released wines, we took the under-five-minute drive to Plan B.