Wining and dining all over the place...

It has been quite a weekend!  And now I have the chance to really catch up on everything that's been going on.  Maybe.

Back in February, JD and I attended an event put on by I'll Drink to That, a networking group organized by Xochitl Maiman, where we had the opportunity to taste the wines made by Dutcher Crossing, a Sonoma winery.  Proprietor Debra Mathy (left) brought several of her wines, which were perfectly matched by the delicious cheeses and breads provided by Melody of the Artisan Cheese Gallery in Studio City.  I was lucky enough to be gifted with a bottle of Dutcher Crossing Zinfandel, and I'm saving it for the right meal.  Winemaker Kerry Damskey makes big, fruit forward wines in small quantities.


2008 Sauvignon Blanc - Dry Creek Valley - actually a blend of Sauv Blanc, with additions of Viognier, Semillon and Rousanne.  A bit of French oak enhances the bright tropical fruit.  Paired with an Appalachian raw Jersey cow's milk cheese that was earthy and dirty.  In a good way.

That evening, we also had the opportunity to renew our acquaintance with Joel Fisher, founder of the LA Wine Fest, for whom JD and I may be pouring wines in June.  Stay tuned!

Shortly after the IDTT tasting - so much fun, so many great folks working their businesses - Xochitl invited us to attend a private tasting at her home.  Xochitl is a big fan - as are we - of Paso Robles, and she spends a significant amount of time meeting winemakers and encouraging folks to learn about some of the smaller wineries and winemakers.  This particular evening she introduced us to Melinda and Joe Laraneta, winemakers and olive oil makers from Templeton.  Xochitl made amazing foods to go with each wine, and I'm ashamed to say I did not write anything down that night, but savored each course and each wine, and just fell in love with Melinda and Joe!  Luckily, I have a good memory, so here are my impressions of the wines:

2007 Cameo - This is a really interesting white wine, made from an Italian grape not commonly grown in the US, Vernaccia.  It's a Tuscan grape from San Gimignano.  Crisp and fresh, with hints of citrus and a floral nose.  Really lovely and refreshing.

2007 Vera Sano Rose - A blend of 70% Vernaccia and 20% Sangiovese has intense floral aromas.  A great wine for picnics - very dry, but fruity, with balanced acid and great structure.

Now you may wonder how I 'remember' all of this, but I was lucky enough to have a second chance to taste these terrific wines this weekend, at another private event.  This was a food demonstration and luncheon at Fab's Corner Cucina in Sherman Oaks.  This event was put together by a new friend, Rico Mandel, chef and photographer and Renaissance man extraordinaire.  Fab's is the brainchild of Joe and Vinnie Fabrocini, who brought their family's recipes to California.  Today, Joe’s son (chef) Roger and grandson Sebastian are maintaining their family recipes along with the creative passion of a trusted staff. 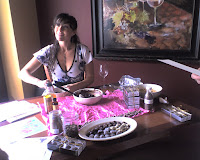 We started the day with Joe and Melinda Laraneta pouring their Cameo and Vera Sano wines accompanied by bruschetta and the best hot sourdough rolls I have had in a long time.  We were then shown into the kitchen and learned from Roger how to make chicken picatta, chicken marsala and chicken saltimbocca!  Afterwards, we trouped out to the dining room, where we were served the house salad, chicken picatta (yum!), more bruschetta - all accompanied by Laraneta 2005 Sangiovese.  For a grand finale, we learned from the lovely chocolatier (above, right) from Dore Chocolatt, how to make the most amazing truffles from the best chocolate...life is good, especially when paired with the Laraneta 2005 No. 5.

As that weren't enough, we dined out with longtime friends, Susan and Margaret.  Susan wanted protein, so we ran over to Gary Bric's Ramp restaurant for ribeye steaks with fresh broccoli, house salads, a bottle of Laraneta No. 5 and a Dark Star Ricordati.  Strangely, when I woke up this morning, I wasn't hungry.

But there was MORE.  Thanks to my colleague Eve Hammond Bushman, I won tickets to the Vine 2 Wine event being held in Canyon Country today!  It's a charity event, held to benefit the Betty Ferguson Foundation, a group whose mission is “To Train, Develop and Empower Women and Youth to be a Vital Force in Society.” I was thrilled to win the tix, especially because they were being given by Steve Hemley of the Pulchella Winery, about whose wines I had heard great stuff, but had not yet had the chance to taste.  That all changed today! 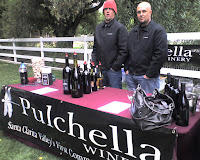 Nate Hasper and Steve Hemley (pictured left), owners and winemakers for Pulchella, are making small production, unfiltered, unfined, elegant and complex wines, mainly sourced from Paso Robles single vineyards.  They had 3 Zinfandels, all of which were delish, although my favorite of the 3 was the 2008 Janes Vineyard version.  Light in color due to some odd timing and weather issues, it was full-bodied with a huge spicy finish.  They also had 2006 Cabernet Sauvignon that was my kind of wine - big tannins, spicy, peppery from some new American oak, with a long, soft finish.  A very impressive outing for these 2 young men.  I look forward to drinking more of their wines.

There were, of course, other wineries at the event.  Les Deux Chats, a new winery whose website is still under construction, produces small quantities of Viognier, Rousanne, Syrah, and Zinfandel.  The whites were lovely, especially the Viognier, which had a beautiful floral nose and terrific dry fruit along with the kind of minerality I really like.  The Rousanne was also just beautiful, with an aromatic nose and an interesting Semillon-like quality.  I think this little winery has a great future!

Quirky winery, Graveyard Vineyards, was represented by owner Paula Campbell, who was pouring some of their interesting wines from Paso Robles.  These are winemakers with a strong sense of silliness, as evidenced in the names of their wines:  Tombstone Red and White (both award winners at the California State Fair in Sacramento), Dark Phantom Petite Sirah, Mortal Zin Zinfandel, and Deliverance, a chocolate-fortified dessert wine that was pretty darn tasty.

Finishing up the day was Soaring Hawk Vineyards.  Owner/winemaker Joe Fariss was only too happy to speak of his passion for making wine, and his Viognier, Syrah and Zinfandel were excellent exemplars of just how good Paso wines can be.  I look forward to tasting his 2008 Syrah in another year or two.  If there's any left!

All in all, it was a delightful event, all for a good cause, and if it had just been around 20 degrees warmer, it would have been perfect.  It was raw and cold and threatening rain, and only my love of the grape kept me there.  I hope the Betty Ferguson Foundation made some money.  JD and I finally bade adieu to Eve and the Pulchella gang and fled to the warmth of the car.

Great - and fast - post Denise! I'm so glad you and JD could come! Thank you for competing in our little contest, and for exposing the Betty Ferguson Foundation, Vine 2 Wine, Pulchella, etc. to a broader audience.

We were happy to be there. Hopefully next year's event will be warmer - or inside!

I got to Dutcher Crossing this past February and really enjoyed them. Plus she's from Wisconsin and so am I so we had lots to talk about.

Sorry I missed the event yesterday. Hopefully next time!

So much wine, so little time - nice job working it and sharing the stories.

It was a pleasure meeting you at Vine 2 Wine Sunday. Thank you for covering our event. I just warmed up today!