Dispatches from the road...

Been on the road since Monday the 8th.  JD and I drove up to lovely Buellton as the first step on our road to San Francisco.  Stopped at Paula's Pancake House for our usual first meal of the day - tuna melt for me, some sandwich filled with cheesy goodness for JD - and headed over to Buttonwood for a winery lesson with Karen Steinwachs.

I left my camera and notepad in the car, and just listened and tasted as Karen showed us around the winery, gave us a detailed and interesting history of Buttonwood, and pulled barrel samples for us of the 2008 and 2009 wines sitting quietly in either new French oak or neutral (used) French oak barrels.  After tasting the Sauvignon Blanc, Cabernet Franc, and the Malbec (she's not sure what she's going to do with it, but it was delicious!), we got a chance to taste assistant winemaker Graham's Gewurztraminer.  He was testing the sulfur dioxide levels, and poured the wine directly from a beaker!  It was delicate and lightly spiced; I think it will be wonderful with spicy Asian food!

After over two hours at Buttonwood, we bade Karen and Graham a fond farewell, and headed over to Los Olivos to check out some of the tasting rooms that have sprung up since the last time we hung out there.


At the Qupé tasting room, Bob Lindquist's son-in-law, Russ (pictured below), was pouring wines made by pretty much everyone in the family.

2008 Qupé Marsanne - blended with 9% Roussanne - Citrus-y nose; lime and lemon.  A bit acidic on the finish, but I think it would be great with some Brie and French bread.  $20 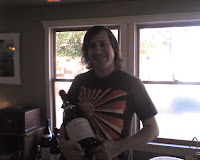 We bought a calendar with gorgeous photos of the Santa Ynez Valley, grabbed our Tempranillo, and moved down the street.  Next door, the Epiphany tasting room had a 'back in 30 minutes" sign in the window, so we moved on to Daniel Gehrs.

Daniel Gehrs has been a mainstay in the Los Olivos area for over 30 years, and there's a good reason for that - great wines!

We had a fun visit with Daniel's son, Jeremy, recently returned from a life away from wine.  He poured us his family's wines:

2008 Chardonnay Monterey County - Spicy and fruity with a nice touch of acid.  $20

We grabbed our bottles of wine and headed out.  By this time it was already around 4 o'clock, and we wanted to head back to Solvang.  So we did. 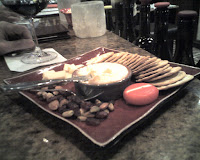 At Tastes of the Valleys wine bar, the lovely Bristol poured me a glass of Lane Tanner's Julia's Vineyard Pinot Noir, and a William James Santa Barbara County Pinot Noir for JD.  It was a Pinot Noir moment.  We sat at the bar and munched on a cheese and cracker plate (pictured), chatting with Bruce and Maggie from Canada about wines all over the world.  Bruce was by himself for a while, doing the TOTV listed tasting, and Bristol let us taste a couple of the wines on the list as well.  We really liked the Labyrinth HAKA Tempranillo from Paso Robles, as well as the Labyrinth Pinot Noir from Bien Nacido.

We hung there for a while, killing time before our 7:00 dinner reservation at the Hitching Post II in Buellton.  As we identified ourselves to the hostess, I saw Frank Ostini in the bar.  I went over to him to say hi, and he graciously pretended to remember me.  Well, we've met enough times that maybe he really did.

We both had the 5 oz filet mignon - mine with rice pilaf and JD's with a baked potato, along with soup and salad and shrimp cocktail, accompanied by a perfect 2001 Bedford Thompson Santa Barbara County Cabernet Franc.

Chatting with our waitress, Barbara, revealed that we had actually met the year before when we both pouring wine at the 2009 LearnAboutWine STARS of Santa Barbara at the Peninsula in Beverly Hills!  She was pouring for the Pali Wine Company, and I was pouring for Presidio.  Small world!

Tomorrow, more about our trip.  Cheers!
Posted by Goddess of Wine at 9:31 AM

It's kind of freeing to have wine sans notepad...once in awhile.