Monday night, JD and I attended our first "Grape of the Night" event hosted by Rusty Dale Sly and blogger Eve Bushman at the Valencia Wine Company.  Once a month or so, Rusty and Eve collect a group of winos...um...wine enthusiasts to taste their way through a whole lotta bottles of a single varietal.  This month's singular grape was Syrah, or as it's known in other parts of the world, Shiraz.  The criteria for each bottle is that it consist of at least 85% of the specified grape. 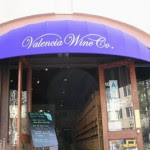 JD and I got there early so that we could choose a bottle from the diverse choices offered by proprietor Guy LeLarge.  Rusty said he brought a special bottle of M. Chapoutier Hermitage, and I said I was thinking about a French wine myself.  I settled on 2007 Domaine La Bastide (Vin de Pays d'Hautervie - Provence), we ordered a combination cheese and meat plate, and waited for the rest of the tasters to arrive.

By around 7:15 we had collected 17 or 18 tasters and 12 bottles of wines from France, California and Australia.  Guy began opening the bottles ably assisted by the lovely Julie and friend Vic (who is actually from another wine store - it's a small, friendly community!).  Eve and Rusty provided some background about Syrah/Shiraz and we began to taste!

NV Uncle Dick 'The Red Brute' Sparkling Shiraz - Bleasdale Vineyards - I would have ended the tasting with this wine.  It was really sweet and thick to start, although it had a surprisingly dry finish.  There was something bitter and green in the finish as well.  Not my cup of tea.

2007 Falcone - Paso Robles - Smoky, meaty nose typical of Syrah.  In the mouth it was actually kind of bacon-y (in a good way!) with some mild sage on the finish.  Very nice.

2005 Ken Brown 'A' Cuvee - Santa Barbara - I'm a big Ken Brown fan and this wine lived up to my expectations.  The nose is still a bit closed, but there were hints of earth.  Mouth feel was surprisingly light considering the deep purple color of this wine.  Some black pepper on the end made for a nice finish.

2006 Hitching Post 'Big Circle' - Santa Barbara County - Now I adore Hitching Post wines, but this one was off.  I'm thinking there was actually something wrong with the bottle.  The nose was smoky all right, but there was something off, slightly bitter, kind of funky in the mid-palate.  The finish smoothed out and fell off.  The wine tasted incomplete.  And weird.  Rusty came over to find out what I thought because he found it odd, too.  Disappointing.

2005 Dutch Henry - Chafen Vineyard, Napa - This was a new one for me.  Several folks commented on how much they liked Dutch Henry's Cabernet Sauvignon, and this Syrah was popular, too.  Aromatically smoky nose; mouthfuls of plum, black pepper with silky tannins.  Lovely wine.

2005 Ethan - Purisima Mountain Vineyard, Santa Ynez Valley - This is from Ethan Lindquist, son of Bob Lindquist, so he comes by his winemaking abilities honestly!  This is WINE.  Smoky nose, lots of earth and spice with highly extracted fruit.  My notes say "yes, yes".  Liked this wine a LOT.

2006 Domaine Georges Vernay, Saint-Joseph, France - The more I taste French wines, the more I see why France has led the wine world for so long.  Wonderful nose full of barnyard smells - earth and manure.  Red fruit (but not forward), spicy finish.  My notes say "oh my, oh my, oh my!"  I wanted to buy a bottle of this after the tasting, but Guy didn't have any more...sob!

1999 M. Chapoutier Hermitage, France - OMG. The first whiff is dark red fruit and spice; the second displays barnyard aromas.  In the mouth, the tannins are still firm, highly structured.  The taste is full of plum and cinnamon.  I wish I could afford to buy this wine.  It was a real gift to be able to taste it.  Just the highlight of the night for me.

2004 The Old School, Barossa Valley, Australia - After the French wines, this Aussie monster comes off unfinessed, hot, high alcohol.  Eucalyptus and something solventy on the end.

2008 Mollydooker 'The Boxer', McLaren Vale, Australia - I've had this wine before, also after a more austere French wine.  This time it came off a bit better.  It's a really big, highly extracted wine.  Tasting with strong cheese and some Italian salami helped it.  It's too much for me just by itself.

Rusty and I talked for a while afterward and agreed that we might have set up the order of the wines differently.  I would have started with the highly finessed and more conservative French wines, then poured the California wines, and finished up with the big bold Aussies.  Popping the French wines in between the big, fruity Americans and the monsters from down under did a disservice to many of the wines.

Still, it was a lot of fun, and I was very happy to spend some quality time getting to chat with Rusty and bond with Guy a bit - both of us very enthusiastic about the Old World selections.  Next month - Merlot!!

This Saturday, Guy and Rusty are going to be hosting a special tasting of wines from the Republic of Georgia (that's in Russia for those of you who suddenly thought of peaches).  These wine are made in clay pots or amphoras.  JD and I will be there!

Good comprehensive study, and tasting notes, of the Syrah we had Denise! See you tomorrow if this rain lets up!

Thanks, Eve. Looking forward to tasting some interesting wines tomorrow!