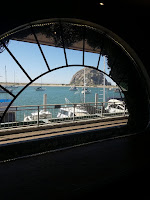 The Goddess of Wine and an enthusiastic group of tasters had some fun at the Morro Bay Wine Seller on March 13th. The idea was to introduce my students to wines with which they were probably not familiar, and that would be fun additions to a beautiful Spring season. So, what wines pair with lighter foods, afternoons on the patio, and tasty grilled foods?
NV Nino Franco ‘Rustico’ Prosecco Superiore, Valdobbiadene, Veneto, Italy – Prosecco is a sparkling white wine from north-eastern Italy, specifically the Veneto and Friuli-Venezia Giulia wine regions. It is also the informal name for the grape variety used to make these wines, which is known officially as Glera. Since July 2009, the name 'Prosecco' has been regulated and protected under DOC law, ensuring that wines labeled with the name come only from the specified areas of north-eastern Italy.

2016 Kerner, Alto Adige, Valle Isarco DOC, Italy – Kerner is a hybrid of Schiava and Riesling created in Weinsberg (Germany) around 1930. It likes the light, gravelly and sandy soils of the higher altitude, sunny hillsides of the mid Valle Isarco in the northern Italian region of Alto Adige. Despite their late ripening period, these grapes make a bright straw yellow color with greenish shimmer. The bouquet is fruity, with white peach and grapefruit. On the palate it is full, fruity and fresh.

2015 Domaine Eugene Carrel & Fils Jongieux Gamay, Cuvée Prestige, Vieilles vignes, Savoie, France – Gamay is an ancient light-bodied red wine similar to Pinot Noir. It has been mentioned in wine history since the 1300’s, and is known best for the Beaujolais Nouveau wines that show up the third week of November. In this wine, made in the region of Savoie, whole clusters were sent into the vat after sorting, resulting in semi-carbonic maceration in temperature-controlled vats for 10 to 12 days, after which it went through malolactic fermentation, and aged on fine lees until bottling.

2014 Gianni_Doglia ‘Bosco Donne’ Barbera d’Asti DOCG, Italy – Barbera is a dark-skinned wine grape variety found in several Italian wine regions, including its native Piedmont, Emilia-Romagna, Puglia, Campania and even the island regions, Sicily and Sardinia. At the turn of the 21st Century, it was Italy's third most-commonly planted red wine grape. When young, most Barbera wines have a bright-red cherry character, soft tannins and a certain roundness. When matured in barrel and allowed to age in bottle for a few years, this turns to a denser, sour-cherry note.

Happy Spring Drinking!
Posted by Goddess of Wine at 9:03 AM