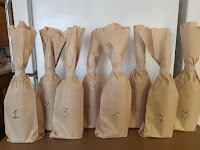 The Goddess of Wine had her way with another intrepid group of tasters as she led them through the wild world of blind wine tasting. As always, students were provided with tasting grids and aroma wheels to help them with their discoveries.

I provided few clues for the class: None of the wines were from California. A student asked if there was any Zinfandel or Pinot Noir. Nope. I encouraged them to think outside of their comfort zone, to trust what they were smelling and tasting.

The wines - mostly from my own cellar - were all from different regions of Italy. Because I like Italian wines, and I had enough to share. And I enjoy torturing my classes with wines they probably have not encountered. That may sound evil, but my aim is to have the group focus on what they are actually smelling and tasting, and not worry about whether or not they're right or wrong. It's all about trusting your senses and building from there.


And so we began:

2017 Citra Trebbiano d’Abruzzo, Italy – Trebbiano d'Abruzzo is the Abruzzo region of Central Italy's dry white wine appellation partner to its iconic red, Montepulciano d'Abruzzo. It is the only DOC in Abruzzo specializing exclusively in white wine. According to the official DOC laws, a Trebbiano d'Abruzzo wine must be made from at least 85 to 100 percent of Trebbiano Toscano or Trebbiano Abruzzese or a combination of the two grapes. Trebbiano Toscano is also known as Ugni Blanc, a grape originating in Italy, but used to great effect in France, specifically in Cognac and Armagnac. One student thought she recognized it - and indeed she had, as I previously poured this wine in my class on Tasting Spring Wines.

2013 Tenentino Forli Sangiovese IGT, Giovanna Madonia Cantina di Bertinoro, Emilia-Romagna, Italy – Forli IGT is a key IGT (Indicazione Geografica Tipica) title of the Emilia-Romagna region in central Italy. It covers the province of Forli-Cesena, in the region's south-eastern corner, on the Adriatic coast. Sangiovese, a dark-berried vine, is the most widely planted grape variety in Italy. Half a dozen students correctly identified this wine with little difficulty. I was so proud!

2013 Carignano del Sulcis DOC Riserva Buio Buio, Sardinia, Italy – Carignano del Sulcis is an Italian wine DOC of Sardinia. It is reserved exclusively for red and rose wines made from Carignan, or Carignano as it is known there, grown in the very south-western corner of the island. Carignan is a black-skinned wine grape variety, most likely native to Aragon, Spain. The variety is found in wines along the Mediterranean coast, particularly in northeastern Spain and in France's Languedoc-Roussillon region. It is used most commonly for blending with many of the region's other key varieties – most famously Grenache, Syrah and Mourvedre. Carignan prefers warm, dry climates when the grape can express high tannins, acid and color. This makes it an excellent addition to red wine blends that have plenty of aroma and flavor, but lack body and depth of color. Carignan is only rarely made as a varietal wine, but the best examples can show characteristics of dark and black fruits, pepper, licorice, and spicy and savory accents. One student correctly identified the variety. Others thought there was greater age in this particular wine due to a bit of oxidation.

2011 Marraioli Sannio Aglianico Riserva DOP, Antica Masseria Venditti, Campania, Italy – Aglianico is a red wine grape variety native to southern Italy. It is known to produce full-bodied red wines that show musky berry flavors with firm tannins and good aging potential. Even when grown in hot climates, Aglianico is capable of reaching high levels of acidity, which makes it a particularly useful vine in the Mediterranean. Sannio is a hilly area north of Naples, straddling the provinces of Benevento and Avellino in the heart of the Campania region, south-west Italy. It extends over the historical grape-growing region of Samnium, the land of the Samnites, a pre-Roman people. Its historical heritage was mentioned in the works of the philosophers Pliny, Cato and Horace, who described the wines as having a "slightly smoky aroma" and an "intense resinous scent". This was my fave of the night, with delicious fruit and a long finish.

2013 Salice Salentino DOC Rosso Riserva, Leone de Castris, Puglia, Italy – Negroamaro is a dark-skinned grape variety that has been associated with the Puglia region in southern Italy for at least 1500 years. Most commonly found in a blend, alongside Primitivo, Malvasia Nera, Sangiovese, or Montepulciano, Negroamaro is valued for its deep color, medium-full tannins and dark berry fruit flavors. The variety can also add earthy tones that can cross over into slightly medicinal flavors. It is mildly aromatic and can produce complex wines that show characteristics of ground brown spices such as clove, cinnamon and allspice. Puglia's Salento Peninsula is arguably the source of the finest Negroamaro wines, particularly those produced under the Salice Salentino DOC title. The warm Mediterranean-style climate here suits the variety well, allowing the vines to achieve optimum levels of ripeness. A relatively drought-hardy variety, it is rarely troubled by the area's limited rainfall. This wine stymied a bunch of students, but one showed me a photo of a bottle of Negroamaro that she drank in Italy!