It was the Old World vs. the New World... 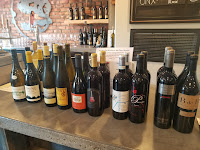 The Goddess of Wine led a group of curious wine enthusiasts through a comparison of Old World wines and New World wines at the Fossil Wine Bar in the picturesque town of Atascadero last night.

The terminology is used to describe general differences in viticulture and winemaking philosophies between the Old World regions where tradition and the role of terroir lead versus the New World where science and the role of the winemaker are more often emphasized.

In recent times, the globalization of wine and advent of flying winemakers have lessened the distinction between the two terms with winemakers in one region being able to produce wines that can display the traits of the other region—i.e. an "Old World style" wine being produced in a New World wine region like California or Chile, and vice versa.

Chenin Blanc – Chenin Blanc is a white wine grape variety from the Loire Valley of France. Its high acidity means it can be used to make everything from sparkling wines to well-balanced dessert wines. It is grown extensively in South Africa and other New World regions.
·   2016 Domaine des Baumard Savennieres, Anjou, Loire, France – Savennières is a region that typically produces a more full-bodied than dry Vouvray. As a wine produced from Chenin Blanc in a relatively cold climate, Savennières is relatively high in acidity, and tends to be a quite long-lived wine that can be somewhat austere and unapproachable in youth.
·   2014 Chalone Vineyard, Estate Grown, Chalone AVA, Monterey County, California – This wine captures both the terroir and the long history of Chalone Vineyard. The 3.79-acre Chenin Blanc vineyard was hand planted by Lucien Charles Tamm, who recognized this remote, mountainous site as having similar limestone soils to those in his native France.

Both of these Chenins were exceptional in their 'typicity', with great acidity and minerality, plus aromatic and bright fruit, with bracingly acidic finishes. Delish!

The class was evenly split as to which of the Rieslings they preferred. Both delicious examples of the grape.

Grenache – The unmistakable candied fruit and cinnamon flavor is what gives Grenache away to expert blind tasters. It has a medium-bodied taste due to its higher alcohol, but has a deceptively lighter color and is semi-translucent. Depending on where it’s grown, Grenache often has subtle aromas of orange rinds and ruby-red grapefruit. When Grenache is grown in Old World regions such as the Côtes-du-Rhône, it can have herbal notes of oregano and tobacco.
·   2015 Montirius ‘Jardin Secret’, Côtes-du-Rhône, France – 100% Grenache; 55-year-old vines. Aged in concrete, unoaked. A deep red wine with hints of raspberry, licorice, and vanilla. Soft, round tannins.
·   2013 Domaine Degher Grenache, Paso Robles, California – Light, blackberry, cherry, hint of leather, cinnamon, cardamom. The wine was past its prime, unfortunately, showing oxidation and odd 'off' tastes.

Barbera – Barbera is a dark-skinned wine grape variety found in several Italian wine regions, including its native Piedmont, Emilia-Romagna, Puglia, Campania and even the island regions, Sicily and Sardinia. Being naturally high in acidity, Barbera can be grown in warmer climates without producing overblown, flat wines. Even warmer sites in Sonoma Valley and the Sierra Foothills of California have produced balanced Barbera-based wines. This acidity complements the cherry flavors found in typical Barbera wines and has contributed to the stereotype of Italian red wines as being ripe, bright and tangy rather than voluptuous and earthy.
·   2015 Gianni Voerzio Martini Ciabot della Luna Barbera d'Alba, Piedmont, Italy – Barbera d'Alba is a key DOC of Piedmont, north-western Italy, famed for its tangy, cherry-like red wines made from Barbera grapes.
·   2014 Pianetta Barbera, Lucas & Lewellen Vineyard, Santa Barbara County, California - 20% New 80% Used French, Russian Oak for 22 months. Dark plum and green herb on the nose. Smooth over the palate with bright acidity on the end. The wine showed a bit of volatile acidity after being open for a while, but that receded.

Tempranillo – Tempranillo is a black grape variety widely grown to make full-bodied red wines in its native Spain. Its name is the diminutive of the Spanish temprano ("early"), a reference to the fact that it ripens several weeks earlier than most Spanish red grapes. It is the main grape used in Rioja, and is often referred to as Spain's noble grape.
·   2014 Finca Museum Reserva, Cigales DO, 100% Tinta del Pais, Castilla y Leon, Spain – Aromas of sweet tobacco are interspersed with black fruits to obtain an effective result. The palate is balanced, slightly tannic. The website offered this somewhat arcane note: “22 months in new French barrels with frequent racking and refilling, optimum hygiene conditions, temperature and moisture, without shaking, performed in silence, conferring this wine a complexity, roundness and harmony making it different.”

All in all, a delightful and delicious evening's exploration. Next month: Easter and Passover wines! What pairs with your holiday feast?