The Wineaux of the Goddess came together for their monthly blind tasting to sample the wines of the Anderson Valley of Mendocino County. Long known for their gorgeous white wines, the Goddess threw a monkey wrench in the works and specified red wines only. 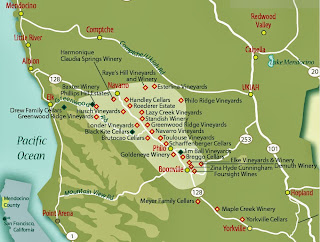 Some background on this cool climate AVA (from Wikipedia): The name Anderson Valley applies to the region from Yorkville (located in a highland meadow straddling the upper Rancheria Creek and upper Dry Creek watersheds) through Boonville (located on Anderson Creek) and Philo (located on Indian Creek) to Navarro (located on Soda Creek). Rancheria, Anderson, Indian and Soda creeks are tributaries to the Navarro River, which flows north and west through the coastal range to the Pacific Ocean; Dry Creek flows south into the Russian River watershed in Sonoma County. The climate is tempered by cool marine air. Steep hills and mountains surround rolling to nearly level alluvial terraces. Elevation ranges from sea level to 2,500 feet. Annual rainfall ranges from 35 to 80 inches, and the average annual temperature is about 53°F. Towards the coast the summers are cool and moist with frequent fog, while the interior Anderson Valley proper features a warm to hot summer climate similar to nearby interior regions, with daytime highs occasionally in excess of 100 °F (38 °C).

The Gold Rush era (circa 1850) brought lots of folks west to California, including many immigrant families from Switzerland and Italy who brought their vines with them. Some of the first included Henry Beeson, his brother Isaac Beeson and William Anderson, their stepbrother, for whom the valley was named. Over the next 100 years, as more farming families settled in the area, apples and grapes became the predominant crops - although the apples proved to be far more successful for many years. It wasn't until the 1960's that modern grape growing and winemaking really took hold.

For this evening's tasting, I was joined by Wineaux JD, Shawn, Debra, Michelle, and Xochitl, who also fed us, for which we are SO grateful. As always, the wines were tasted blind. Here's what we found after the reveal:

1. 2011 Knez Winery Pinot Noir, Boonville - The cloudy, pale red - kind of a cherry cough syrup color - had a medium-plus level of alcohol in the nose, although it was shown to be only 13.1%. It opened with cherry rhubarb aromas leading to a bit of minty menthol and some stony minerality. On the palate, very tart, high acid cherry and clove with medium tannins and a long, earthy finish. This wine needed fatty foods to counteract the acidity. $31.99 at K&L Wines

2. 2010 Husch Estate Pinot Noir, Philo - Clear, bright garnet in color, this Pinot smelled of cherry, roses and cedar, with a dollop of manure. A bit smoky on the palate with soft, wet earth overtones provided a masculine, gamey wine that improved as it opened. 13.9% alcohol. $18 at Bevmo

3. 2009 Elke Vineyards Pinot Noir, Donnelly Creek Vineyard, Boonville - This clear, light - well, almost dark pink - wine had a youthful appearance but an older taste and feel on the palate. The nose was barnyardy, full of wet dirt. In the mouth, there was something minty with basil and herbal overtones. Firm tannins at the end turned the finish bitter. We all agreed it was kind of funky, but might pair well with pesto. 14.3% alcohol. $26 at Total Wine & More

4. 2011 Navarro Vineyards Pinot Noir - Clear and light in color, this wine made us think it might be Grenache. The nose was redolent of banana and 'Nilla wafers, and the palate provided tart dried raspberry with herbaceous and earthy overtones. Medium light tannins provided a backbone for a wine that could pair nicely with sweet and sour pork or grilled meats. 13.4% alcohol. $20 from the winery (wine club)

5. 2011 Donkey & Goat "Pourquoi Pas" Merlot - This winery has been getting a lot of press recently, but not for its Merlot. Clear, light and slightly rusty in color, the nose was all over the place - green pepper, earth, rhubarb, herbs, pickle relish - yes, pickle relish. In the mouth it was SOUR and hard-edged with red fruit and a peppery finish. I didn't like it much, but Michelle and Debra thought it was interesting. It never really improved. 12.6% alcohol. $20 at K & L

6. 2011 Courtney Benham Pinot Noir, Martin Ray Vineyards - Clear, light red color provided an interesting background for an earthy, barnyardy nose with cola overtones. In the mouth, sage, dried cherries and crushed violets blended with dusty tannins. Nice sipping wine, very - dare I say it - Burgundian. I can honestly say this is the best wine I've ever had from Courtney Benham; I have not been fan in the past. 13.7% alcohol. $24 at Total Wine & More

7. 2010 Husch Estate Pinot Noir, Boonville - Yep, we had a second bottle of the 2010 Husch. Marya and Michelle both recognized it at once, but the rest of us actually found some bottle variation. Or maybe we were just hungry. It paired well with dinner.

Another interesting evening with great friends, good wines, and amazing food! Next month the hearty wines of Toro, Spain. ¡Ole!