Wining in the Santa Ynez Valley... 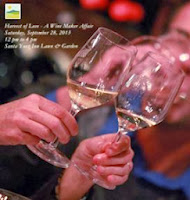 The Goddess and JD received an invitation from the Santa Ynez Valley Wine Club to attend the Harvest of Love - A Winemaker Affair on September 28th at the Santa Ynez Inn in the tiny hamlet of Santa Ynez. This intimate event featured 6 small wineries: Roark Wine Company, Solminer Wine, Turiya Wines, LaMontagne Winery, Kaena Wines and Shai Cellars in a lovely shady green setting on a perfect California autumn day.

I've mentioned before that I rarely go to big wine events because it's too hard to talk to the people making/selling their wines. At a small event like this one, JD and I were able to meet the wine makers in person (some of whom we already knew) and find out what drives their passion for winemaking.

I was excited to taste the wines from LaMontagne Winery. Winemaker Kimberly Smith and I have been Facebook friends for a while, but this was our first meeting, and I'm so happy it happened! LaMontagne is the family name, and there is some history of winemaking in France, but Kimberly is focused on the cool climates of the Sta Rita Hills and Santa Maria, and is producing some tasty wines. Her 2012 Sierra Madre Pinot Blanc was the first wine of the day, and it was the perfect opener. Luscious fruit, crisp acidity and low alcohol make this the perfect wine to pair with seafood or brunch. Her 2011 Pinot Noir from the Huber Vineyard has a big star in my notes; all I wrote was "Yum." Find the wines and Kimberly at her new tasting room in the Lompoc Wine Ghetto.

Solminer Wine - I was blown away by this new winery. Winemakers/Owners David and Anna DeLaski bought a home that just happened to have 3 acres of Syrah in place, but their real passion leans toward the varieties found in Austria: Riesling and Gruner Veltliner. Employing the expertise of Steve Clifton, of Brewer-Clifton and Palmina Wines, as their consultant, they are offering a gorgeous 2012 Dry Riesling made from grapes grown just outside of the Sta Rita Hills AVA - read extremely cool climate - and a 2012 Gruner that made me want to stop there and not taste anything else, it was that good. I did go on to taste their 2012 Linus Rose - named for their infant son - made entirely from the Syrah on their property. Perfect year-round wine, crisp, dry, fruity. Their 2012 Rubellite Syrah was also a different take on the grape: light in color and texture, with the expected smokiness. All their wines are moderately priced between $20 - $30. I can't wait to see where this young couple is going to go with their upcoming vintages.

Roark Wine Company - I first met winemaker Ryan Roark at a Sneak Peek for the Garagiste Festival. This intense young man from Texas loves the Loire Valley in France where he learned the ropes at a small family vineyard and winery, leading him to an internship at Etude in Napa and an internship in New Zealand. He found his way to Santa Barbara where he discovered his passion, Chenin Blanc. His first 60 cases were from 40-year-old Chenin Blanc vines from the Santa Ynez Valley. Ryan now makes 1000 cases of wines including Chenin Blanc, Cabernet Franc, Malbec and a Grenache/Syrah Blend, and is planning on doubling his output in the near future. His 2012 Chenin Blanc and 2012 Cabernet Franc are easy to drink and going fast. Priced between $17.50 to $30, his wines don't stay at the winery long. 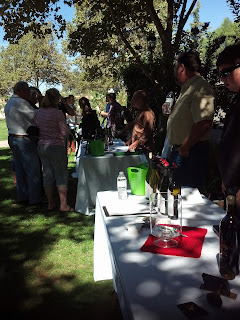 Shai Cellars - So, is there any praise I haven't lavished on Shawn Shai Halahmy's beautiful wines? Our group of friends refers to his Adome red blends as "crack wine," because it's so addicting! Shawn has a little of his 2008 Adome (65% Syrah/35% Cabernet Sauvignon) available as a library wine, but you really should order some of his WS 92-point 2009 Adome (same percentages) or his 2009 Grenache. Shawn just recently bottled his 2010 Adome, a different blend of Syrah and Grenache, and I can't wait for it to be released in January 2014. For those of you who don't know, "Shai" means "gift" in Hebrew, and "Adome" means "red."

Kaena Wines - Mikael Sigouin wasn't able to attend due to his very busy harvest schedule - between Beckman, where he is the winemaker, his own Kaena, and anywhere else he consults, it was a busy weekend - but was ably respresented by the charming Lisa who poured his delicious wines. I love his 2012 Grenache Rosé and his 2010 Santa Ynez Valley Grenache, and stopped by the new tasting room in Los Olivos the next day to buy some. So should you.

Turiya Wines - Winemaker Anglea Soleno credits Eric Jensen of Booker Wines as her inspiration for some of her winemaking methods. She attended the Viticulture and Enology program at Allan Hancock College, and in 2008, made her first vintage. She named her winery Turiya, a philosophical ideal describing the ultimate state of consciousness where reality and truth are harmonious. Her 2008 vintage is comprised of big, well-made, high-priced reds that delight the palate, but may prove to be for collectors with deep pockets. I especially liked her 2008 Syrah from the Camp 4 Vineyard, a rich, spicy quaff, but at $85, it was not in my budget.

I found Solminer pouring at Palmina in the Ghetto - loved their lineup too!