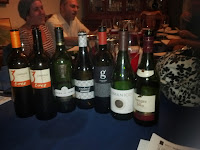 The Goddess of Wine and her merry band of wine aficionados met to taste the wines of Toro, Spain. As it turned out, almost all the Wineaux brought samples of the noble Spanish grape, Tempranillo, known in Toro as Tinto de Toro. And there was an interesting and unexpected lesson at this tasting.

Some background on Toro mainly from Wikipedia: Toro is a Spanish Denominación de Origen (DO) in the province of Zamora, northwest of Castile and Léon (Spain). The area covered by the DO is in the southeastern corner of Zamora province. Wine has been made in Toro since the end of the 1st century BC, when the ancient Greeks taught the local Celtic tribes. In the Early Middle Ages, the wines from Toro were the first to be traded in the region of the River Duero.

King Alfonso IX granted lands to several religious orders with the understanding that they would plant vines, and many of the existing churches in Toro today were built thanks to the wealth generated by the wine trade. The reputation of the wines from Toro grew and it was sold further afield in cities such as Seville and Palencia. At this time the wine producers built underground wineries (bodegas) in order to obtain better quality wines and to have more effective temperature control. At the end of the 19th century, wine were exported to France during the phylloxera crisis, which did not affect the local vines as they were protected by the sandy soil. The vines of other regions of Spain were replaced by vines from Toro as well. Toro still has a number of very old vineyards with pre-phylloxera Tinta de Toro, which in recent years have been used to source grapes for special cuvées.


The DO has an extreme continental climate (long, hot summers, cold winters) with Atlantic influences. Temperatures vary greatly over the year. Rainfall is light, with much sun. The soil is formed by sediments of sand, clays and dark lime-bearing topsoil, with fine and coarse sands. The vineyards are at heights of between 620 m and 750 m above sea level.

In order of the reveal - all wines tasted blind and provided by the Wineaux:

1. 2009 Enebral. Semi-opaque ruby color. Cherry, flint and asphalt in the nose. On the palate, ashy minerality, anise, firm - kind of crunchy - tannins followed by a nice acidity on the medium length finish. Pair with hard cheese or flatiron steak. A good, not complex wine. 14.5% alcohol. $15 at Total Wine & More

4. 2010 Romanico, Teso la Monja. Deep ruby color with an odd tobacco, mushroomy, frat house fragrance, with some wet leaves and something floral - rose, maybe? On the palate, full-bodied, big tannins, still needs lots more time in the bottle. Oh, and there's that asphalt again. Seems to be a strong characteristic of the Toro wines. This is a swell wine, said Rico. 14.5% alcohol. $15 at K&L Wines

5. 2009 3 Liberales. Deep ruby color. Light candy cherries, fennel/anise on the nose. Shawn, Rico and Shannan all exclaimed about the serious spiciness - like chili peppers and Red Hots - on the palate. Serious tannins with mocha and black pepper on the finish. It reminded JD and Debra of wine number 1, but turns out to be the same as wine number 2 - with completely different results. Again, 14.3% alcohol. $20 at Total Wine & More

6. 2010 Dehesa Gago. Ruby color. Earthy, barnyard, burned barn in the rain (per Rico), and eucalyptus on the nose. In the mouth, flat, no fruit, some tobacco. Just bitter tannins and a bad aftertaste. Shannan made the "face" when she tasted it - and spat it out. Feh. 14.5% alcohol. $18 at Total Wine & More

7. 2009 3 Liberales. You read that right. 3rd bottle of the night. It was corked. You could still smell some oak, dusty minerality and, of course, asphalt, but it was corked.

8. 2010 Sangre de Toro. Not actually from Toro, but Catalunya. This is why you don't trust sales clerks in certain large stores. However, it was a tasty 65% Garnacha/35% Carignane blend that effectively got the bad taste of the last wine out of our mouths. $11 at Bevmo

So, interesting to find three bottles of the same wine at a blind tasting, with seriously different results. All three bottles purchased at the same store, making one think that they were all in the same shipment. So why the huge bottle variation? Especially the two bottles that were drinkable? Thoughts?

All the Wineaux agreed it was a very educational evening, and were happy that the Goddess chose Toro after all. Then we finished off most of the good wines along with Xochitl's delicious cassoulet and a couple of amazing desserts left over from the weekend's debauchery...I mean...dinner.

Thanks again to the Wineaux who came and played - JD, Debra B., Xochitl, Rico, Barbara, Shawn, and our newest member, Shannan (who will be opening the Luna Vine Wine Bar very soon!). Cheers!
Posted by Goddess of Wine at 4:21 PM