A week ago, JD and I had the great fortune to participate in another of LearnAboutWine's fabulous Friday night wine events.  This one was titled 'An Offer You Can't Refuse!' and featured Bay Cities' Godmother sandwiches and 20 terrific Italian wines - tasted blind - to accompany them.  Ian always puts together a diverse selection of wines for his tastings and this one did not disappoint. 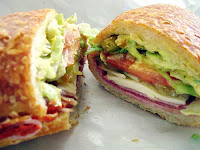 We arrived early to help set up the tables and prepour the wines.  2010 Sommelier of the Year (Southern California Restaurant Writers Association), Jared Hooper, was on hand to do the pouring as we placed the precious glasses on the appropriate spaces on the numbered place mats.

From the legendary 2000 Gaja Barbaresco, valued at $300/bottle and rated 95+ points, to a $12 bottle of 2006 Lagone, Aia Vecchia Toscana (somewhat Bordeaux-ish with its percentage of Cabernet Franc), there was something for everyone's taste.  And based on the voting, there was a wide range of tastes.  My own favorites were diverse as well.  I've bolded my faves of the evening.

It was great fun - everyone got a chance to vote on their favorite - and there were definitely some surprises.  Remember, the cost of the wine doesn't guarantee its popularity when no one knows what it costs!  The discussion was animated, the sandwiches were delish, and the wines were delightful.

Another great evening at Loft218!

Wow! Some expensive wines! Sounds great - and fit for a Goddess!