Wining in Paso Robles with the CAB Collective...Day 2... 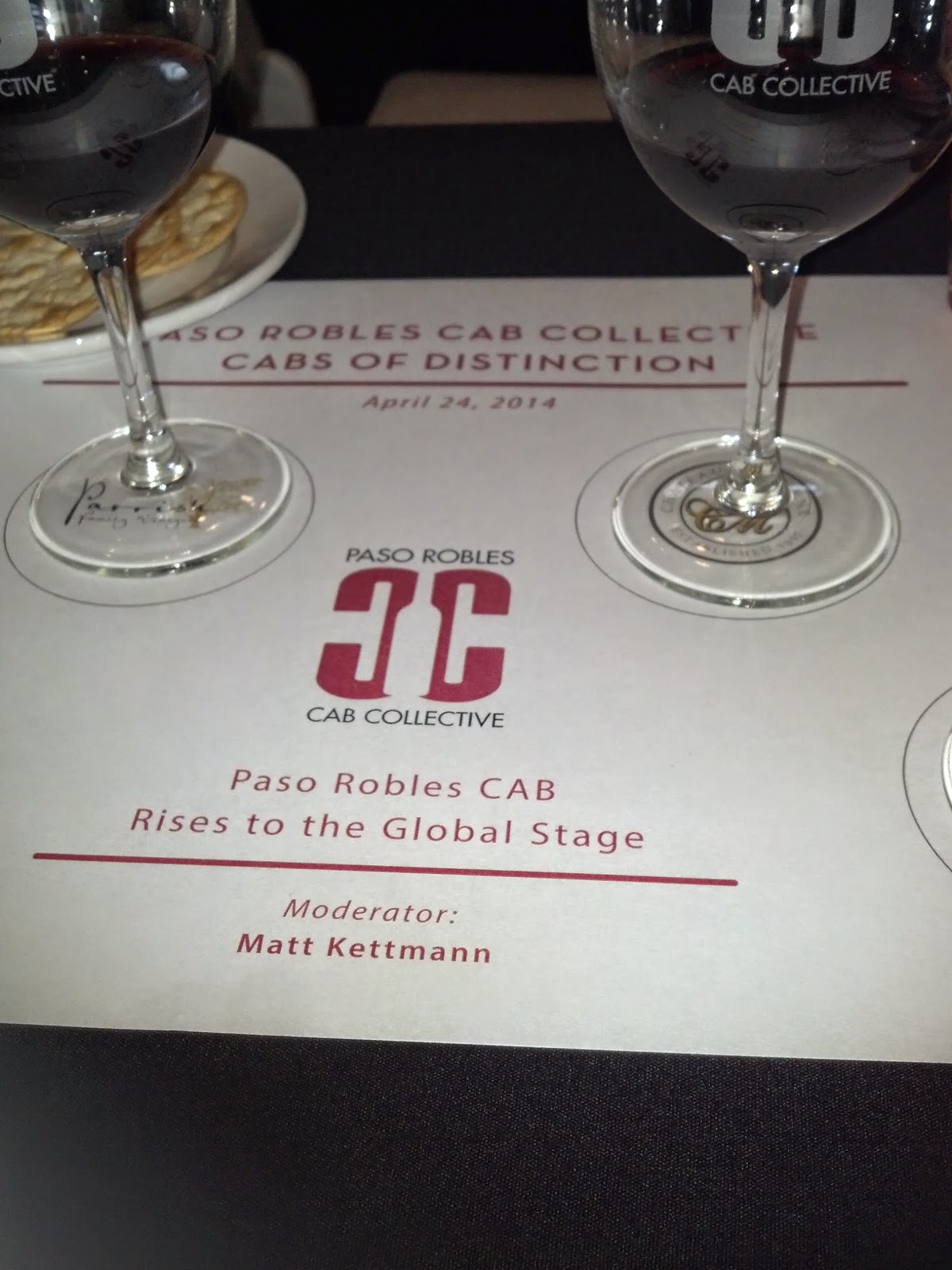 Day 2 of the Goddess of Wine's and JD's coverage of the Paso CAB Collective dawned bright and sunny as we headed to the Vintner panel discussion at the Paso Robles Inn.

The Paso CAB Collective was created in 2012 as a "grass-roots non-profit organization...formed with the belief that the Bordeaux varieties Cabernet Sauvignon, Cabernet Franc, Merlot, Petit Verdot and Malbec grown in the Paso Robles appellation—and the subsequent quality of the wines produced—is under-represented in the marketplace and across the wine industry."

The tables in the ballroom were set for a large number of media and sommelier guests, but it appeared that many folks may have had too much fun the night before and decided not to attend. It was their loss, as the discussion was lively and thought-provoking.

Moderator Matt Kettmann, the newly appointed contributing editor for Wine Enthusiast, made sure that the winemakers - Kevin Sass of Halter Ranch, David Parrish of Parrish Family Vineyard, Mike Mooney of Chateau Margene, and Daniel Daou of DAOU Vineyards & Winery - each had time to share their thoughts and experiences while providing the requisite geeky grape-growing and winemaking information.

All of the winemakers are also growers, an important point for this panel who were closely questioned by audience members not just about climate and soil, but about the clones used in Paso. I've been in discussions about clones when talking about Pinot Noir and Chardonnay, but this was the first time that specific Cabernet Sauvignon clones were identified for Paso's many microclimates. In addition to the ENTAV clones from France (being used in a new program at Sextant), there is a series of heritage clones. The workhorse clones of Cabernet Sauvignon were clones 7 (also known as the Concannon or Wente clone) and clone 8, both of which were taken as cuttings from the same vine at the Concannon Vineyard in St. Helena. The best known of the new clones from France is 337, which reliably gives reasonable yields of smallish berries, and has fruit-forward flavors. Daniel Daou also proudly offered the information that his vineyard is the first in Paso to plant the much-lauded To Kalon clone (from the famous Napa vineyard), which is similar to Clone 6, but yields 20% less fruit, with small, intensely flavorful berries, resulting in less juice, but higher phenolics.

David Parrish spoke eloquently about light management to control pyrazines, those pesky unripe elements that make Cab taste like green pepper, heat ("growing degree days"), and the wonderful calcareous soils found in Paso providing minerality and acidity. He also uses falcons to deal with pests; since he stopped using nets to keep out birds, relying solely on falcons to eat and drive away other birds, he has zero bird damage. That's a big deal.

Mike Mooney talked about the Grower Degree Index (GDI) that goes back 17 years and covers the temperature patterns in the Paso area. Creston, where Chateau Margene is located, is one of the coolest regions in an AVA that has huge diurnal shifts - 100 degrees Fahrenheit during the day can drop to 50 degrees or less at night. This is good for the grapes, as they create sugar during the day and balance it with acid at night.

Geeky enough for you? There was much more, but I'll spare you before your eyes glaze over.

Most importantly, all the winemakers agreed that their goal was to make sure that Paso was on the map for high quality, age-able, premium Cabernets.


We broke for lunch at this point and headed to Pomar Junction. The Merrill family’s agricultural heritage and grape growing history dates back 8 generations. Today Dana and Marsha Merrill and son Matthew farm the vineyards, while Matthew's winemaking is complemented by winemaker Jim Shumate.
After nearly 30 years of growing grapes for many of the finest wineries in California, including those in Napa (Oooh, you thought all Napa Cabs are 100% grown in Napa? No.), the  Merrills decided to produce their own wines. All wines produced are exclusively farmed by the Merrills who believe that control from planting and pruning through harvest, fermentation and cellaring is critical for success. They received certification to the SIP (Sustainability in Practice) program within the Central Coast Vineyard Team. Also, Dana was the first San Luis Obispo County Chair of the California Assn. of Winegrape Growers,  a charter member of the pioneering vineyard Sustainability group, the Central Coast Vineyard Team, and is a past two term Director of the Paso Robles Wine Country Alliance.

After a hearty lunch of French dip sandwiches, garlic fries and lots of lovely wines ranging from a most-welcome Viognier to a perfect Rosé, a delightful sparkling wine, and, of course, deep, dark, delicious reds including a Reserve Cabernet, winemaker Jim Shumate led us to the winery where he spoke about his vision and his methods, and then took us out to the vineyard, where the bright sunlight was a welcome change from the cool dark rooms we had been in for 2 days.


We wanted to stay and sit on the veranda and stare out over the sea of vines, but we headed back to the Paso Robles Inn for a round of Rare and Reserve wines being offered. I must admit that, at this point, the Goddess was...done. My palate and my body rebelled at the thought of more Cabernet, so I turned to JD, said, "You're going to have to write up this portion of the tasting," and went outside to sit on the porch, drink water, and chat up new friends from dinner and lunch. Stay tuned for JD's post about the Rare and Reserve wines.

But the day was not done! The generous sponsors and winery members of the CAB Collective had one more delightful event on the agenda: Dinner at Justin. The PRCC team had thoughtfully arranged for buses to transport us up to the recently renovated Justin winery for a rather amazing barbeque, complete with 2 whole pigs slow-roasted over night, accompanied by side salads, the best jalapeno cornbread ever, and all the wines - current and reserve releases - that had been poured. It was a beautiful evening. Oh, and we got to hang out with our BFFs Xochitl Maiman (I'll Drink to That) and Eve and Eddie Bushman (EveWine101), and new friend Jason Lopez (ConnectedSocialMedia) with whom we shared dinner previously at Le Vigne and lunch at Pomar Junction.

Stay tuned for the rest of our adventure in Paso Robles, as we visit one of the most beautiful properties in the region, Daou Vineyards, for a taste of the future, and JD reports on the Rare and Reserve wines from the CAB Collective.

Cheers!
Posted by Goddess of Wine at 9:47 AM