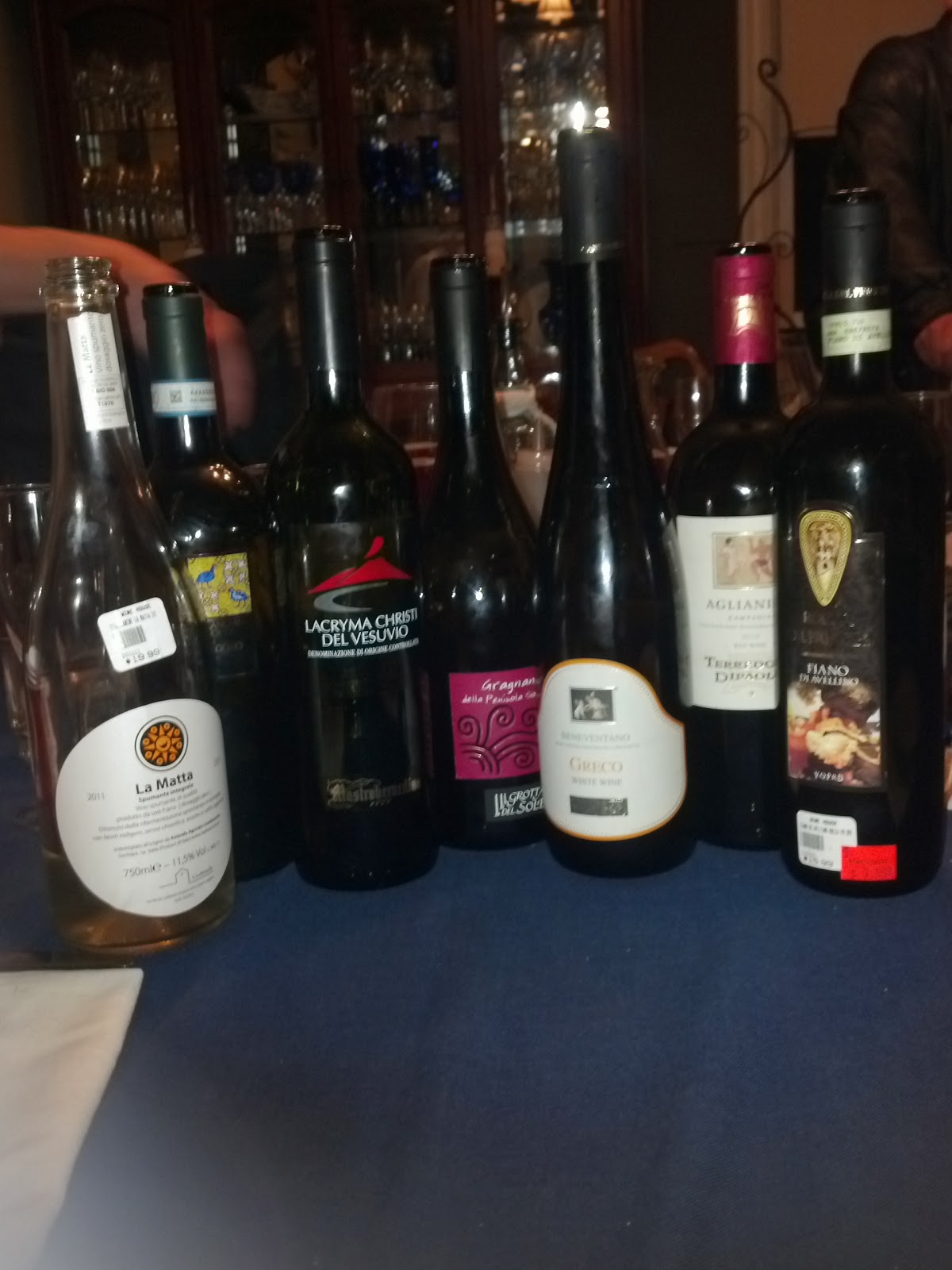 The Goddess of Wine and her merry band of Wineaux met to taste the wines of Campania. Tasters included Barbara B., Debra B., Shawn H., Rico M., Marya G., Xochitl M., JD, and me.

Some background from Wine-Searcher.com:
Campania is the ‘shin' of Italy's boot, anchored by its capital, Naples. Its name comes from Campania felix, a Latin phrase roughly meaning 'happy land'. The region has strong historical links to wine and vine, dating back to the 12th century BC, and is one of Italy's very oldest wine regions. The influence of ancient empires, including the Greeks, Romans and Byzantines, means some of this area's varieties have historical legends attached. The area is also famous for producing Falerno (Falernum), one of the most ancient wines in Italy. Campania, like many Italian regions, is home to an impressive array of grape varieties, some of which are found almost nowhere else on earth. Its most important variety is arguably Aglianico, the grape behind the region's two most famous and respected red wines: Taurasi and Aglianico del Taburno. Aglianico was introduced to the area by the Greeks and later cultivated by the Romans. Also vital to Campania's vineyards are the white-wine varieties Fiano and Greco, which are championed by the region's most respected white wines, Fiano di Avellino and Greco di Tufo.

Viticulture is in its element thanks to an abundance of sunshine, dry hot summers, mild winters, a long growing season and volcanic soil (the latter ensured phylloxera was kept at bay). The coastal Mediterranean breezes blow in from the Tyrrhenian Sea and across the Apennine Mountains to temper the heat, encouraging a bright acidity in the fruit. These factors also contribute to the varied qualities of Campania wines. For instance, an inland Falanghina grown on slopes where there is more rainfall offers more fragrant notes than those found on the coast, where the climate is continental and tends to be more mellow.

Interesting note: Traditional foods from the region include pizza and spaghetti alla putanesca. Hostess Xochitl did not disappoint in her food pairings, providing crunchy Italian bread, Asiago cheese and a wonderful cheesy pasta supplemented with mild Italian sausage and olives.

The wines - provided by the Goddess and JD:
2011 Casebianche La Matta Sparkling Fiano - This unfiltered Fiano uses ambient yeasts (what’s already in the air around the winery), and no added sugar a.k.a. “dosage,” like a normal methode Champenoise.  The citrusy, yeasty nose gave way to elements of slate with lavender on the palate and a crisp, slightly bitter finish. Pair with a hard cheese. 11.5% alc. $19.99 Wine House

2009 Rocca del Principe Fiano di Avellino - Butterscotch, quince and some nice minerality on the nose, but the palate was slightly oxidized, not unpleasantly. A spicy edge develops in the finish. Drink now. 13.8% alc. $15.99 ($9.00 close out) Wine House

2011 Feudi di San Gregorio Falanghina – Clear gold color with tropical and stone fruit on the nose. Grapefruit, white flowers and a creamy salinity on the palate made us think about sea bass, branzini or scallops - and maybe some butternut squash. We all liked it a lot. 13% alc. $12.99 Wine House

2012 Cantina del Taburno Beneventano Greco - Taburno - This Greco is pure and focused in its white peaches, flowers and minerals. JD wasn't happy with it, but I have a star next to it. 13% alc. $17.99 Total Wine & More
2010 Terredora Di Paolo Aglianico - A medium-bodied dense ruby/purple red. Aromas of dirt, dust, earth, anise, leather, ripe red berries, violets and a slight gamey character. On the palate ash, charcoal and firm tannins. A young wine that can benefit from some aging. 13% alc. $13.99 Wine House

2012 Mastroberardino Lacryma Christi del Vesuvio - The De Angelis family is the oldest estate on the Sorrento coast, making wine from ancient Greek varietals. These deep red "Tears of Christ" provide flavors of cherry, earth, eucalyptus and something "weird" on the finish according to Marya. I tasted tomatoes and cherries, and found that it really needed to open. 12% alc. $17.99 Total Wine & More

2012 Grotta del Sole "Gragnano" Penisola Sorrentina - Fun. Fizzy. Deep red color. A "new wine," bottled as early as November, composed of Piedirosso, Aglianico and Sciascinoso grapes, plus a host of unspecified "traditional" varieties making up the other 40%, according to the winery. Coffee on the nose; Xochitl said it smelled like a winery - like fermenting wine! On the palate, coffee with cherries and some ash. Lovely.  Price: $16.99

Next up: Wines of Austria! Cheers!
Posted by Goddess of Wine at 9:17 AM