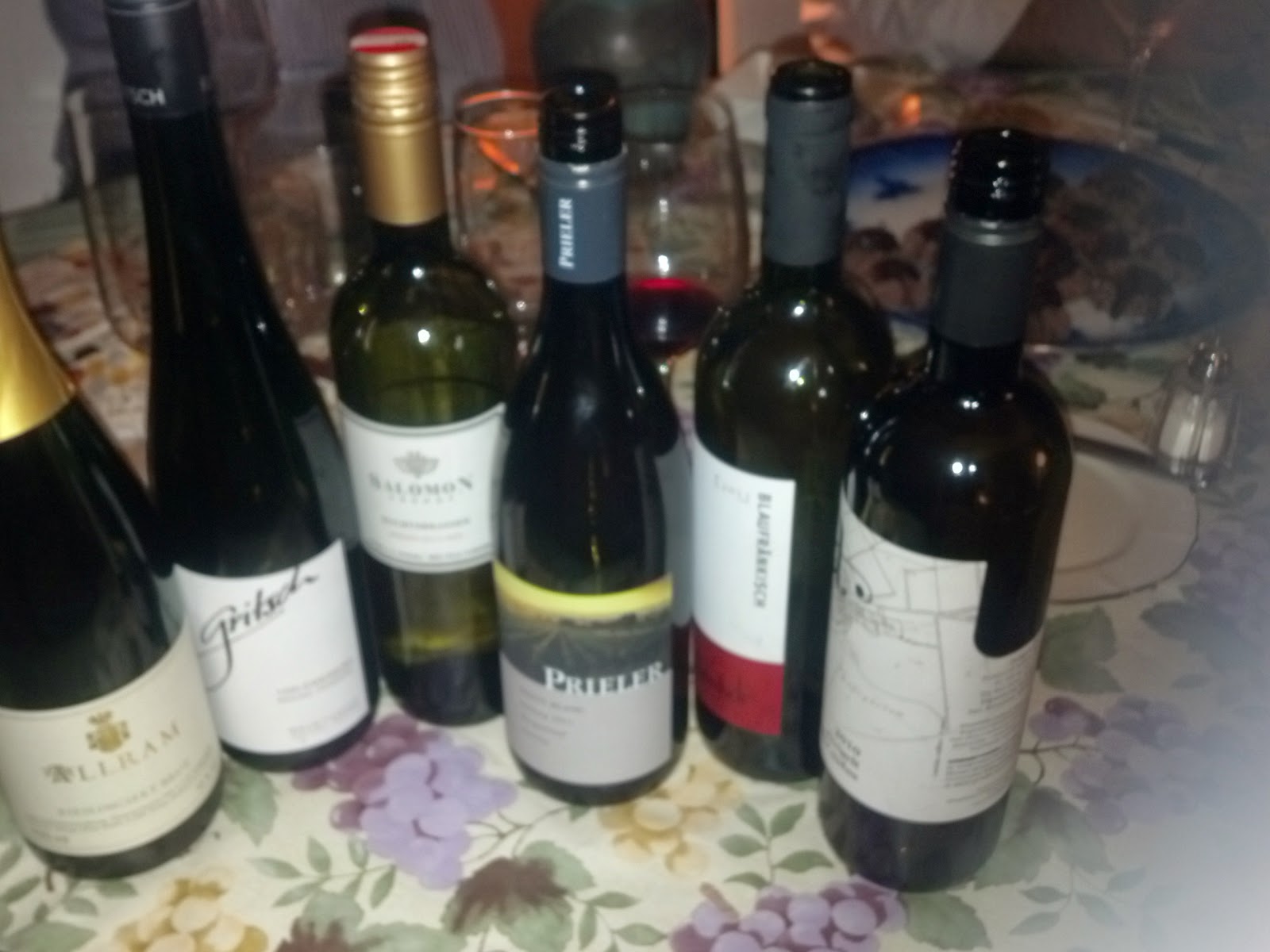 The Goddess of Wine and JD hosted the monthly meeting of the Wineaux of the Goddess. Present were Shawn Halahmy, Barbara Barrielle, Michelle McCue, Rico Mandel, JD, and me! This month's subject: the wines of Austria.

In researching Austrian wines, I was fascinated to discover the astonishing history of wine in that region. There is archaeological evidence of wine being made in Austria for over 4000 years. The Romans encouraged viticulture, the Danube became one of the greatest wine trade routes, and things were pretty good for a long time. Then during the 19th century, crop diseases such as powdery mildew and downy mildew and, of course, the deadly phylloxera took their toll on Austrian vineyards. Although the wine producers were hard-pressed to reinvigorate the wine trade, the viticultural disruption allowed lower quality grapes to be replaced with better varieties, particularly Grüner Veltliner. After World War I, Austria was the third biggest wine producer in the world,much being exported in bulk for blending with wine from Germany and other countries.


During the 20th century Austrian wine became a high-volume bulk wine business. The early 1980s saw large yields of wines that were light and acidic, and not very good. Wine brokers discovered that these wines could be made sale-able by the addition of a small amount of diethylene glycol, more commonly found in antifreeze, which imparted sweetness and body to the wine. The adulteration was difficult to detect chemically — the 'antifreeze scandal' broke when a broker claimed the cost of the chemical on his tax return. Although the amounts of glycol were minimal, and only a few middlemen were involved, exports collapsed and some countries banned Austrian wine entirely. The antifreeze jokes persist, but the scandal actually saved the industry in Austria. Strict new regulations restricted yields, producers moved towards more red wine and a dry style of white wine, and the middlemen went away, forcing producers to sell direct and encouraging the expression of local terroir. There was a massive change in the culture of wine production in Austria towards an emphasis on quality, as opposed to the low standards that permitted the scandal to happen in the first place.

The Austrian Wine Marketing Board was created in 1986 as a response to the scandal, and Austria's membership of the European Union prompted further revisions of her wine laws, notably the DAC system of geographical appellations launched in 2002. Today Austria is around 18th in the list of wine producing countries, and the wines are now world-class in quality.

The Goddess and JD provided the wines, all purchased at K & L Wines in Hollywood. During the tasting, we paired the wines with hard and soft cheeses, soft French bread and various olive oils and vinegars. After the tasting, dinner consisted of a modest green salad with EVOO and Cabernet Sauvignon vinegar, a rich Austrian noodle dish filled with ham and cheesy goodness, topped off with utterly sinful sacher torte cookies, all made by the busy JD!

The wines, in order of tasting:

NV Weingut Allram Riesling Sekt - $19.99- A traditionally-made sparkling Riesling (methode champenoise), this wine started us with delicate bubbles, pineapple and stone fruit in the nose and a slightly petroleum note on the palate along with nice minerality and a slight pithiness at the finish. A delightful way to start the evening!

2012 Salomon Undhof Hochterrassen Grüner Veltliner - $13.99 - Clear and colorless with a rich yeasty nose. Shawn said he smelled 'cat pee', but the rest of us thought not. There was that typically herbaceous quality - Barbara smelled thyme. On the palate, lemon, herbs and a bit of petrol made for an acceptable wine.

2011 Gritsch 1000 Eimerberg Riesling Federspiel Wachau - $18.99 – Previously $29 - This was one of the evening's favorites! Great intensity with rich notes of petrol, apples, stone fruit texture and a finish with a hint of orange marmalade. Some subtle smokiness and mint on the finish made for a tasty treat.

2010 Winzerkeller Andau Zweigelt Burgenland - $12.99 - Medium red color, with a nose that stinky - in a good way! Dried raspberry and chocolate on the nose. Herbal notes at the edges, with a firm finish of dark chocolate. We knew this was going to be a great pairing for dinner, and it was!

The wines just kept getting better the longer they were open, not that there was much left to revisit once we had finished dinner.

Thanks to all the Wineaux, especially Michelle with her great knowledge of Austrian wines!

Next month...hmmm...maybe wines of the Languedoc? I'm thinking Crémant! Cheers!
Posted by Goddess of Wine at 11:30 AM