Send in the Clones...Chardonnay Clones, Part 1... 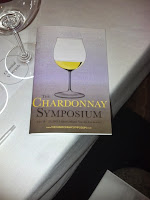 Much to our delight, the Goddess of Wine and JD were invited to attend the fourth annual Chardonnay Symposium - the only event of its kind in the United States focusing on the golden grape. This was a chance to taste the world’s (well, mostly California's) most celebrated Chardonnays alongside food pairings designed to enhance the wine experience, with an educational panel session moderated by Wine Enthusiast’s Steve Heimoff.

This super-geeky discussion covered the 800-year history of the Chardonnay grape, the selective breeding programs involved in creating clones with preferred attributes, and the personal and professional preferences of these winemakers in their passion for creating wines that we want to drink.

Chardonnay has been grown in California since the 1880's. It was widely grown until Prohibition resulted in almost all the acreage being eliminated. By the 1960's, experts at UC Davis were working on developing new strains, resulting in higher-yielding, virus-resistant clones. There is now an extensive collection of Chardonnay clones allowing growers and vintners to choose clones suitable to their climates and soils. This is a big deal, especially in discussions of terroir in winemaking. 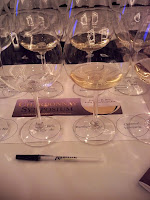 Eckhard Kaesekamp provided a PowerPoint presentation of how clones are developed, and Karl Wente provided a fascinating account of his family's history in the Livermore Valley and how the Wente clone became the 'go-to' clone for most winemakers after Ernest Wente, using a cutting from Montpellier, France, developed the first, now historic, Wente clone in 1912.

Merry Edwards discussed her trial clonal vineyard while she was working at Matanzas Creek, and how the 1976 Judgement at Paris changed the world of Chardonnay and wine forever. Clarissa Nagy thinks of Chardonnay as the "compliant child," the most impressionable and malleable (as opposed to Pinot Noir, well-known to be a difficult grape).

Matt Dees and James Ontiveros spoke passionately about how the cool, foggy terroir of the Santa Maria Valley and Sta Rita Hills adds elements of minerality and acidity to the grapes, especially in some of those historic vineyards: Solomon Hills, Sanford and Benedict and others. Jeff Stewart also discussed how the site really drives him to bring out the best in the clone, especially in his single-vineyard wines.

Fin du Fresne made an important point towards the end of the discussion: Despite the record-keeping that takes place regarding clones, there is no actual regulation, allowing a grower to name a clone as he likes. His example was the Chamisal clone in Edna Valley. Chamisal states that it originated in the Chamisal Vineyard. Period.

The Wandering Wino, Shawn Burgert, asked each winemaker what was most important: the clone or the terroir? Opinions were divided with Merry Edwards emphatically for the clones, and Matt Dees just as strongly for location. Discussion could have gone on further, but we were out of time, and it was time to eat a quick boxed lunch, get on the bus and head to Byron Winery to taste a lot of Chardonnay.