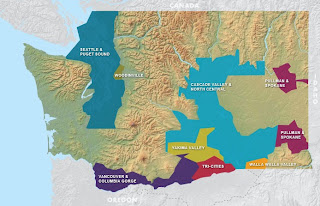 The Goddess of Wine lost the entire month of June to one of the worst colds ever, followed by necessary shoulder surgery, so we're playing catch-up with life. As is our wont, the Wineaux of the Goddess met on the second Wednesday of the month to visit Washington State wines. The instructions were: Wine from any appellation, white or red; bring them pre-bagged for blind tasting.

Some background on Washington State:
Wine grapes have been grown in Washington since the early 1800's, but no one grape has taken the lead in the state. When I think of Washington State, I often think of some of the larger, more commercial wineries like Chateau Ste. Michelle or Columbia Crest, but there's a lot more going on at the artisan level than one might think from going to the supermarket. Over 31,000 acres are planted with a wide variety of grapes including Aligote, Cabernet Franc, Cabernet Sauvignon, Chardonnay, Chenin Blanc, Gewurztraminer, Grenache, Lemberger, Leon Millot, Madeleine Angevine, Madeleine Sylvaner, Malbec, Marechal Foch, Merlot, Muller Thurgau, Muscat Canelli, Muscat Ottonel, Petit Verdot, Pinot blanc, Pinot gris, Pinot noir, Riesling, Roussanne, Sangiovese, Sauvignon Blanc, Semillon, Siegerrebe, Syrah, Viognier, Zinfandel.


The early history of the Washington wine industry starts with the introduction of Cinsault grapes by Italian immigrants to the Walla Walla region. In the 1950s and 1960s, the state's biggest wineries (Chateau Ste Michelle and Columbia Winery) were founded. In the 20th century, the wine world discovered a new aspect of Washington wines every decade - starting with Rieslings and Chardonnays in the 1970s, the Merlot craze of the 1980s and the emergence of Cabernet Sauvignon and Syrah in the 1990s. Washington has twelve AVAs with all but one located in Eastern Washington. The largest AVA is the Columbia Valley AVA, which extends into a small portion of northern Oregon and encompasses most of the other Washington AVAs. These include the Walla Walla Valley AVA, the Horse Heaven Hills AVA, the Wahluke Slope AVA, Lake Chelan AVA, Naches Heights AVA, and the Yakima Valley AVA, which in turn also encompasses the Rattlesnake Hills AVA, Snipes Mountain AVA and the Red Mountain AVA. The Columbia Gorge AVA is west of the Columbia Valley AVA. Washington's only AVA located west of the Cascades is the Puget Sound AVA.

The Cascade Mountain range defines both the geography and climate of Washington state, serving as a dividing line between the wet, marine influenced climate of the western part of the state from the drier, desert-like climate of the eastern half. The mountains create a rain shadow over the eastern half by blocking weather fronts holding precipitation from carrying over the mountains and descending onto the Columbia River Basin. This creates the desert-like conditions with a more continental climate in Eastern Washington and heightens the roles of rivers in the region's viticulture. In addition to providing vital irrigation, the rivers help moderate temperatures during the winter which is prone to severe frost coming from the Arctic. In winter, overnight temperatures in the wine growing regions of Eastern Washington can drop to as low as −15 °F (−26 °C). The sudden drop to these sub-zero temperatures can make the water in a vine's wood canopy quickly freeze which can cause the vine to literally burst open.

So let's see what we tasted!

2011 "K" Viognier from Charles Smith Wines, Columbia Valley - 100% Viognier. Clear, pale straw in color with stone fruits and good minerality on the nose. In the mouth lime balanced with good acidity made for a delightful start to the evening. Interestingly, after smelling the nose, the Goddess said, "Smells like Viognier to me," after which several others at the table started discussing qualities of Sauvignon Blanc such as grassiness and cat pee. I was relieved to discover that I was right. Pair with scallops, calamari and other seafood, and maybe something with Bearnaise sauce. $19.99 from K & L.

2011 Hedgeline Vineyard Pinot Gris, Washington State - Clear as water with grass, ammonia, salinity (sea air), and tar on the nose; everyone thought it was Sauvignon Blanc at first, but I think Barbara suggested it was Pinot Gris. On the palate, there was some pineapple and guava, reminiscent of Tropical Life Savers. A few of us found it flat and unintegrated - and I'm not a big fan of anything tasting of guava. Pair with coconut shrimp, Kahlua pork or other Caribbean foods. $18.99 at Ralphs.

2009 Gordon Brothers Cabernet Sauvignon, Columbia Valley - Deep ruby color and something delightfully earthly on the nose - for those who like barnyard fragrance - blended with chocolate, brambles, and maybe a little cough syrup. On the palate white pepper, chocolate and dried cherries, with hints of dark chocolate had Rico and Shawn talking about chicken mole, coffee-crusted pork and/or steak. Great texture and depth. We all liked this wine a lot. $27.99 at Total Wine & More. Note: In 2012 Gordon Brothers changed their name to Gordon Estate.

2010 14 Hands Vineyards "Hot to Trot" Red Blend, Columbia Valley - Predominantly Merlot, with Syrah, Cabernet Sauvignon and "hint" of Mourvedre. Clear, light red color. On the nose, coffee, rubber, something skunky. The palate opened with very, very ripe cherries and berries with a black pepper finish. Not much acid, just LOTS of fruit. We all thought it would pair nicely with chocolate dessert, and Shawn suggested orange and fennel to go with it. Tasty, but not age-able. $12.99 at BevMo.

2007 Kestrel Vintners Syrah, Yakima Valley - Actually a blend of 85% Syrah, 10% Malbec and 5% Viognier, this wine had a deep, clear ruby color. The complex nose was like a candy store - you know that aroma when you enter a candy store? Licorice, tar, rubber, and...candy. On the palate, tart raspberry, cherry, chocolate, almond, and cinnamon made for a delightful treat. This would go well with something fatty like prime rib or Peking duck. Tasty! $29.00 at Total Wine & More.

Thanks to Xochitl, Barbara, Shawn, Rico, JD for playing - as well as providing some tasty snacks and dinner. Next month...well, I'm still thinking. Cheers!
Posted by Goddess of Wine at 12:00 PM