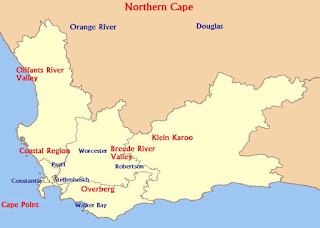 So far this year, the Goddess and her merry band of Wineaux have been searching out different wine regions of the world. We've tasted the wines of Champagne, the Northern Rhone Valley, Greece, and Argentina, and we continued our trek through the Southern Hemisphere to South Africa. Members could bring either white or red wine, but we would still taste blind.

Some background from Wikipedia: The roots of the South African wine industry can be traced to the explorations of the Dutch East India Company which established a supply station in what is now modern day Cape Town. A Dutch surgeon, Jan van Riebeeck, was given the task of managing the station and planting vineyards to produce wines and grapes intended to ward off scurvy among sailors during their voyages along the Spice Route. The first harvest and crushing took place in 1659, seven years after landing in 1652. After some time, many growers gave up on winemaking, choosing instead to plant orchards and alfalfa fields to feed the growing ostrich feather industry. The growers that did replant with grapevines, chose high yielding grape varieties such as Cinsault. By the early 1900s more than 80 million vines had been replanted, creating a wine glut.

For much of the 20th century, the wine industry of South Africa received very little attention on the world stage. Its isolation was made worse by the boycotts of South African products in protest against the country's system of Apartheid. It was not till the late 1980s and 1990s when Apartheid ended and the world's export market opened up, that South African wines began to experience a renaissance. Many producers in South Africa quickly adopted new viticultural and winemaking technologies. The presence of flying winemakers from abroad brought international influences and focus on well known varieties such as Shiraz, Cabernet Sauvignon and Chardonnay.

South Africa is located at the tip of the African continent with most wine regions located near the coastal influences of the Atlantic and Indian Oceans. These regions have mostly a Mediterranean climate that is marked by intense sunlight and dry heat. Winters tend to be cold and wet with potential snowfall at higher elevations. In fact, climate-wise, most South African wine regions tend to be very similar to Bordeaux and Napa! 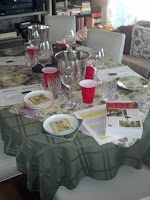 We had a small group for this tasting. Here are the highlights from the reveal:

2011 Two Oceans Sauvignon Blanc, Western Cape - Clear, straw color with peach, honey and flint on the nose. And a bit of cat pee, just so we knew for sure it was Sauv Blanc. Shawn (known for being a bit sneery about SA wines) said, 'Wow, this is not as South African as I would have expected,' meaning he liked it. A lot. Great acid and fruit balance with terrific minerality and stone fruits on the palate with a long apricot finish. Beautiful. $11.99 at Bevmo

2011 Glen Carlou Chardonnay, Paarl - Deep gold in color, surprising for such a young wine, led to a kind of funky nose, a bit herbaceous and barnyardy with a dollop of rubber and lots of new French oak. On the palate it was sour and acidic at the first sip, but had an interestingly soft finish with honey and dried apricots. It changed radically in the glass, improving as it opened, but we still weren't really happy. $18 at Vendome

2011 Spier Rose, Western Cape/Stellenbosch - Very pretty clear, deep pink color was strawberries and watermelon in the nose. On the palate, tart acid became a creamy finish redolent of strawberries and lime. We spent some time discussing what the varietal was, with Barbara and Debra thinking it was Pinotage. Shawn, the long-time hater of Pinotage was truly surprised at the reveal. It was indeed Rose of Pinotage. Delish! $7.99 at Total Wine and More

2009 Spier Shiraz, Western Cape/Stellenbosch - Our first red of the night was almost opaque, a deep, deep purple. The nose was full of unripe pyrazine, green and dusty. At first Debra said, 'Me no likee,' but as it opened the smoky scent of toasted oak embers, blackberry, dark cherry and chocolate made us rethink our first impression. Chocolate, dried cherries and tar on the palate made for a very likeable wine. $19.99 at Total Wine and More

2010 Spier '21 Gables' Pinotage, Western Cape/Stellenbosch - This deep purple, opaque wine smelled like chocolate-covered cherries with hints of almond and cedar. In the mouth, the firm tannins provided a good backbone for the savory, cinnamon and clove spices, and more of that chocolate-covered cherry. Shawn couldn't believe it was Pinotage. Obviously an excellent exemplar of that most South African grape. $23.99 at Total Wine and More

As you may have noticed, three of our selections were from Spier, who clearly 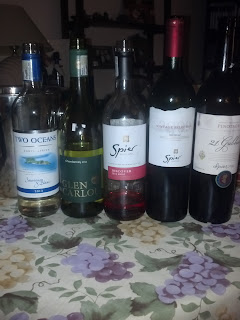 has some great distribution in the US. We all really liked the Pinotage - there was none left after we finished noshing and chatting. I was delighted to find that there was just enough of the Two Oceans Sauv Blanc left for the night after. JD and I had tasted their Cab/Merlot blend many years ago on a trip to Canada, and I was sorry to find that their reds are mainly sold on the East Coast. I hope they'll be able to find distribution on the Left Coast soon.

And just in case you were wondering what Pinotage is, it's a cross between Cinsault (often called 'Hermitage' in South Africa), and Pinot Noir, and while it is considered the grape of South Africa, I've heard rumors that some is being grown in Sonoma. I'll be very curious to compare California to South Africa.

Next month we come back to the States and taste wines from Washington State! Cheers!