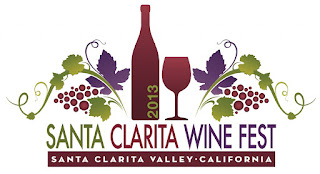 It's that time of year again! Yep, it's the 3rd Annual Santa Clarita WineFest, happening on March 2, 2013; 2pm-6pm (Trade, media and VIPs: 1pm), at the Bridgeport Marketplace - 24061 Newhall Ranch Rd, Valencia, CA 91355, and the Goddess of Wine will be there with her team of sommeliers and wineaux to assist in the fun!

Tickets are now available for purchase on santaclaritawinefest.com. Use discount code EveWine101 to get your tickets for only $40!

The WineFest donates a portion of event proceeds to the Santa Clarita-based Michael Hoefflin Foundation for Children’s Cancer. The Michael Hoefflin Foundation is a public nonprofit 501(c)(3) foundation that provides financial and emotional support to children and their families in the Santa Clarita and surrounding valleys. The organization educates the public and provides grant funding for innovative research to accelerate progress in the fight against pediatric cancer.

“The Michael Hoefflin Foundation is very excited to be partnering again for the 2013 Santa Clarita WineFest,” said Hoefflin executive director Gillian Stone. ‘The Foundation was thrilled to be the charity benefactor of the 2012 event. Not only did the WineFest donate beyond its initial pledge, they created a wonderful community experience."

The Santa Clarita WineFest is produced by the same team behind the highly popular LAWineFest, now entering its ninth year. Joel M. Fisher, PhD, is President and CEO. Dr. Fisher is a member of the Society of Wine Educators, the Circle of Wine Writers (UK), and the International Federation of Wine and Spirits Writers. He has written extensively on wine and wine pairings, and has taught at Cordon Bleu in Pasadena and the Culinary Arts Department of the Art Institute of California - Los Angeles. A Sommelier for the Escoffier Association of Southern California, he is also a Wine Host for CRN’s What’s Cooking Show.

Thanks for sharing the discount code with your followers - you are one rocking goddess!

I've read some interesting disappointing reviews about this wine fest, but am interested in going. Is it worth it?

would love to hear anyone's response to that concern. I'm especially excited because Bock Pince is listed as a participant, and that is the upper elite in Hungarian wines (lived in Hungary last year). I've having a difficult time finding any good Hungarian wine here in California, and definitely want to go unless there is consensus that this fest is disappointing. Thanks everyone.

Bobby and Anonymous - As with any large event, there are good things to be found, and things that may not be interesting to some folks. There is a good selection of wines, beer and other spirits, good food trucks and other foods available, plus other local vendors - all in a nice site with decent parking and access to restaurants and other services.