Wining with the Wineaux of the Goddess...Merlot...

The April meeting of the Wineaux of the Goddess Marching Band and Chowder Society took place Wednesday evening at Fab's, our home away from home. In attendance were the usual gang of picky palates: Marya Glur, Shawn Shai Halahmy, Rico Mandel, Xochitl Maiman, Debra Bizek, John Dickey, and myself, the Goddess of Wine. Our mission: Merlot!

There's so much information about Merlot, much of it obscured by the unfortunate scene in 2003's Sideways in which the hapless Miles, trying to sabotage a situation to disguise his discomfort at Jack's actions, blurts out, "I'm not drinking any fucking Merlot!" Rex Pickett, the author of Sideways, says he was surprised at the venom with which actor Paul Giamatti said the line - and doubly surprised at the immediate reaction in the wine world: Consumers stopped buying Merlot-based wines, and growers ripped out their Merlot vines and planted Pinot Noir! Heavy sigh...


I personally love Merlot. Merlot has been kind of a "go-to" wine for me for a long time; it's lighter in tannins than Cabernet Sauvignon, a bit fruitier and more accessible in a shorter amount of time than thicker-skinned varieties. I really fell in love with Merlot in the early 1990's, when JD and I discovered Napa winery Clos du Val and their lovely Merlot. Shortly after that, we were introduced to Chile's La Playa Merlot - for a 4th of the price of the CdV - and happily quaffed our new passion. 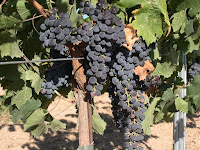 Merlot is a dark blue wine grape used as both a blending grape and for varietal wines. The name Merlot derives from the French word for a young blackbird, merlot, probably from the color of the grape. Its softness, combined with early ripening, makes Merlot a popular grape for blending with the more tannic and later-ripening Cabernet Sauvignon. According to Wikipedia, by 2004 Merlot was estimated to be the 3rd most grown variety globally, just behind Cabernet Sauvignon. Merlot grapes are identified by their loose bunches of large berries. It has thinner skin than Cab Sauv, and is consequently less tannic, has a higher sugar content (early ripening) and lower malic acid. Merlot likes cold soil, especially clay. It needs to be well-drained and somewhat stressed.

I was cheerfully anticipating our blind tasting, and I was not disappointed. We all brought wines, gave the bottles to the lovely Jamie to open and cover with numbered bags, and tasted the wines blind. Our discoveries are as follows - the wines were revealed after we finished tasting them. In the order of tasting:

1. 2009 Frogs Leap, Rutherford, Napa Valley. The appearance was clear ruby with pink edges. In the nose, alcohol, leather, dirt, dark raspberry, menthol. On the palate, high acid, cinnamon, tart cherries, rhubarb. I thought the finish was smooth and long lasting, but Marya disagreed. The baking spices and yeastiness reminded me of my mom's 'roll cake', but Marya was mentioning corn tortillas, so clearly it was lucky we were on different sides of the table! We thought it would go well with a burger or something fatty. Definitely acceptable. $25

2. 2004 Simcic, Slovenia. 85% Merlot/15% Cabernet Franc. Clear, garnet with some brown/brick tones. In the nose, earth, barnyard; Rico used the descriptor 'fruit field' to explain that he was tasting brambly fruit and wood. In the mouth firm tannins, pepper, menthol, leather, wood, with a slightly bitter finish, smoothing out with nice minerality and eucalyptus. Marya and Xochitl liked it. I thought it might pair nicely with pastas and sausage, but I wasn't really a fan.

3. 2003 WineShop at Home 'Pied Violet', Napa. I threw this in out of curiosity. WSAH is a direct sales company; it's the Mary Kay of wine. They purchase juice from premium wineries (who cannot be revealed due to non-disclosure agreements), bottle it in privately-labeled bottles, provide tasting notes and pairing suggestions, and sell it via the home party. The Pied Violet label was one of the reasons I had gotten involved with WSAH. The appearance of this wine was clear garnet with a bit of oxidation due to age. In the nose dark berries, chocolate, cherry cola, and hazelnut with a bit of French Oak. The mouth was WOW, silky mouthfeel, chocolate, lushly balanced. The overtones of basil and other herbs made me think that this was a blend of Merlot and Cabernet Franc. It made us long for steak with Bernaise sauce or wild boar. Back in 2008, when I bought this wine, I paid $18. Newer releases are higher.

4. 2006 Norton Barrel Select, Mendoza, Argentina. Appearance of clear garnet. Nose redolent of barnyard, skunk, red currant, Robitussin, menthol, cherry cough syrup. Debra, Xochitl and Shawn all thought the wine was heavily manipulated and used terms like 'slimy' for the mouthfeel. I wasn't a fan, but didn't find it quite as objectionable as the others did. $12

5. 2011 Chateau La Rose Perrierre, St. Emilion, France. 90% Merlot/20% Cab Franc. This not-yet-released barrel sample was challenging! The color was opaque, black/purple with some magenta around the edge. The nose was dusty, closed, fruity with overtones of Bubble Yum. The mouth was seriously tannic, smoky and dusty, charred; Xochitl or Marya said it was reminiscent of charred marshmallows. We all agreed it was very young and very dumb, and were not surprised to discover just how young it was. Later, over dinner of lamb ragout on a bed of fresh pasta, Shawn said that the wine seemed to have gotten smarter.

6. 2002 Gainey, Santa Ynez Valley. Color was bricky, but clear; definitely some age on it. The nose was dusty with earth and anise (or was it majoram? or fennel? or licorice?) overtones. In the mouth was root beer. I didn't like it, but pretty everyone else did - until dinner, at which point Shawn, who had brought it, decided he didn't like it either. $18 - $25

7. 2005 Dark Star Cellars, Paso Robles. The appearance was a bit cloudy, orange with age. Not much nose, but in the mouth lots of chocolate, mocha, silky tannins, root beer, cola, cinnamon. Winemaker Norm Benson will be happy to know how much we all liked it, and it was great paired with the aforementioned lamb ragout. $20

So, that was it. An interesting and diverse group of wines. Great food. Lots of laughs. Thanks, as always, to Fab's great team: Amelia, Chef Ian and Jamie!

Next month: Malbec!
Posted by Goddess of Wine at 11:33 AM