Not just any Port in a pandemic... 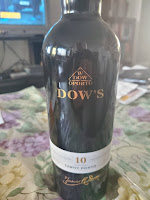 The very first time I tasted tawny Port, I was in a wonderful seafood restaurant overlooking Puget Sound. After a delicious and very filling dinner, everyone at the table decided to order dessert - actually a rarity in my family, but that's another story. I read the dessert menu, and as full as I was, everything seemed too rich, and then I saw an entry for a glass of Tawny Port with dark chocolate truffles.

Honestly, ordering that dessert was one of the better decisions I've made in my life. "Life-changing" is a bit overused, but it was certainly an eye-opening moment. And I've enjoyed many glasses of Port, both Ruby and Tawny, ever since.

For those unfamiliar with Port, it's a fortified wine produced in the Douro Valley of northern Portugal. It's typically a sweet red wine, often served as a dessert wine, although it also comes in dry, semi-dry, and white varieties. Other port-style fortified wines are produced outside Portugal in many countries, including the United States (many in California), but under the European Union Protected Designation of Origin guidelines, only wines from Portugal are allowed to be labelled "port", despite some of the labeling allowed by the TTB.

Port wine is typically richer, sweeter, heavier, and higher in alcohol content than unfortified wines. This is because distilled grape spirits are added to fortify the wine and halt fermentation before all the sugar is converted to alcohol, and results in a wine that is usually 19% to 20% alcohol. Ports are distinguished by the amount of time they are aged, so the "youngest" Tawny you'll find will be at least 10 years old; "Tawny" due to the reddish-amber color from its oxidation. Anything younger will be designated as "Ruby" due to the lesser amount of oxidation and brighter colors. 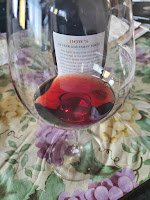 Which brings us to Dow's 10-Year Tawny Port. Aged in large oak barrels, called balseiros, this wine has developed a deep reddish-brown center with a garnet edge. On the nose, almonds and dried cherry soften to vanilla and buttery toffee. Great mouthfeel, and a bit of pepper on the dry finish make this a delicious pairing for #JDBakes' "Darn Good Chocolate Chip" cookies!

Oh, and another fact about Port: Once you've opened the bottle, it will keep up to a month (do refrigerate after opening), so you get to enhance your dessert for more than just one day! It retails for around $33, and is easily found in your local wine merchant.