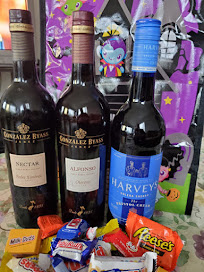 This does seem to be the year where we're all out of our comfort zones. And the wines I've received recently reflect that. So when I opened a box and discovered three different sherries, accompanied by a big bag of Halloween candy, I thought it was just par for the course!

Sherry is a wine that many folks think is old-fashioned, found only in Agatha Christie mysteries, or meant to be drunk by self-important elder statesmen after dinner is finished, and the ladies have retired to whatever ladies retire to, while the men light up cigars and discuss world matters.

Nothing could be further from the truth.

Sherry is a fortified wine made mainly from white grapes in the Jerez region of Spain. It is produced in a variety of styles made primarily from the Palomino grape, ranging from light versions similar to white table wines, such as Manzanilla and Fino, to darker and heavier versions that have been allowed to oxidize as they age in barrel, such as Amontillado and Oloroso. Sweet dessert wines are also made from Pedro Ximénez or Moscatel grapes, and are sometimes blended with Palomino-based sherries. Contrary to what we're discussing today, most Sherry is not sweet, and is meant to be paired with other savory delicacies.

The wines sent to me were accompanied by Halloween candy! I was most familiar with the sweetest of the wines, the Gonzalez Byass Nectar PX (Pedro Jimenez), and decided to start there. Sherry made from PX always reminds me of hard coffee-flavored candies from my childhood. I sipped the dark brown wine, savoring the rich nutty sweetness, and decided to pair it with a Milk Dud. 'Cause I haven't had Milk Duds in years. Well, it was delicious, but there were consequences: In biting down on the chewy delight, I popped a crown. Oh, yeah, now I remember why I stopped eating chewy candies...sigh...

The next night, having had my crown glued back in place, I opened the Gonzalez Byass Oloroso. Oloroso is not sweet, although it can be used to make sweet wines such as Bristol Cream. I would usually have this wine as an aperitif, with nuts and cheese. In this case, I paired the wine - carefully - with a Payday bar, full of sweet and salty peanuts. A perfect match!

On the third night, I opened the Harvey's Bristol Cream, having chilled it per the instructions on the bottle. The deep amber wine is sweet and rich, with a slightly spicy aroma. I liked it better as it warmed up, although I can see how some might enjoy it poured over ice. I paired it with a milk chocolate Hershey bar. Delicious!

Have a happy and safe Halloween, and enjoy that leftover (or purposely purchased) candy with some Sherry! Cheers!