Monday morning, went to the doctor. She thought it was flu. Prescribed some meds. I went back to bed. Felt worse.

A few days later, I went back to the doctor. My eyes were bright red and scary looking. The doctor thought it was conjunctivitis. I said, I’ve been home for the last week; where would I pick up pink eye? She prescribed an antibiotic eye treatment after taking a culture. I went back to bed, feeling even worse.

When the headache hit me in the middle of the night, and I was pretty sure my brain was trying to escape, the doctor told me to go to the emergency room. JD and I sat in chairs for over 2 hours, while I threw up into a pail from the pain. The emergency room staff did a CAT scan, told me there was no ‘bleed’ and sent me home with a bottle of Vicodin. I went back to bed, continuing to throw up. The Vicodin made it worse.

The next morning we went back to the doctor. She took one look at me, and knew she had misdiagnosed everything. It wasn’t flu. And it wasn’t pink eye. But something was definitely going on with my eyes. I was still throwing up and I was having trouble focusing. She called a local ophthalmologist and got me in as an emergency.

After the eye doctor did an exam, she said to me, You have acute onset glaucoma. I said, What are you talking about? My eyes are healthy. She said, Yes, you’re right, but your pressure is up over 50 (normal is 10 or below), and your ‘angles’ are wide open. We have to get you to emergency so we can get your eye pressure down.

On the doctor’s recommendation, JD took me to Glendale Adventist Hospital, where my doctor had privileges. They did more testing, hooked me up to an IV, starting pushing Mannitol to bring down my eye pressure. After several hours, they found a bed and admitted me.

9 days later, after enough terrifying tests and specialists to be a bad episode of House, I went home. The diagnosis was loosely “vasculitis”. My autoimmune system was trying to kill me. My inflammation levels were off the charts. My eyes were the weak point, and even though we got the pressure back to normal, there was damage, probably irreparable.

I became best friends with my rheumatologist, who explained that I was going to have to take Prednisone for a while, until we could get my numbers down. Then we could work on a more holistic approach to my autoimmune issues.

I continued to have physical issues left over from being on my back for over a month. Balance issues, vision issues. Had lots of physical therapy to get my strength and balance back. Continued monitoring of my vision changes until things began to normalize. Hearing tests, neurological tests.

14 months later, I was finally off of Prednisone, my inflammation levels were at zero or negative (which is good!), and my eyes had stabilized with no trace of glaucoma.

None of the doctors could provide a clue as to why this had happened, but they agreed that I had been treating symptoms for years without anyone realizing there were connections. My rheumatologist said I might stay in remission forever, or it might reoccur. No clue.

10 years later, I’m fine. No recurrence. Interesting side effect of getting my inflammation under control: no more migraines. At all. I suffered from migraines since I was a teenager. Now, none. I rarely even get headaches any more. And my allergies changed. I’m not allergic to cats anymore.

But autoimmune disease remains a fear. It’s in my family. My mother had Reynaud’s Syndrome, which is on the autoimmune spectrum. My sister, depressed and depleted from multiple surgeries and a lot of pain, died from a rare and horrible and painful and debilitating occurrence of pemphigus vulgaris.

I woke up Thanksgiving morning full of dread and sadness, and couldn’t figure out why. It took until Friday night to realize it had been 10 years. Sitting at the bar in our favorite hangout, a performer sang Jim Croce’s “Time in a Bottle” and I cried for a while. Not the first time I’ve cried in a bar, but that’s another story.

Glad to be here. 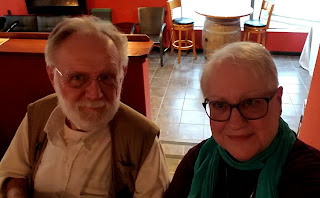