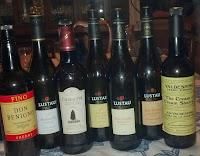 After much discussion about how to finish up 2013 - the Year of Regions - the Goddess and Xochitl agreed to do a slightly different tasting: Sherry paired with tapas, one for each wine. Now Sherry isn't something that I run into a lot. In fact, I don't actually remember tasting any Sherry in my life except for the Sherries that were presented in the Spanish wine certification class I took back in 2010, so this was going to be a bit of a stretch. Between discovering just how complex and interesting all these different Sherries are, and Xochitl's perfect pairings, it turned out to be a remarkable and delicious evening.


Some background on Sherry from Wikipedia: Sherry is a fortified wine made from white grapes that are grown near the town of Jerez de la Frontera in Andalusia, Spain. It's produced in a variety of dry styles made primarily from the Palomino grape, ranging from light versions similar to white table wines, such as Manzanilla and Fino, to darker and heavier versions that have been allowed to oxidize as they age in barrel, such as Amontillado and Oloroso. Sweet dessert wines are also made, from Pedro Ximenez or Moscatel grapes, and are sometimes blended with Palomino-based Sherries.

After fermentation is complete, the base wines are fortified with grape spirit in order to increase their final alcohol content. Wines classified as suitable for aging as Fino and Manzanilla are fortified until they reach a total alcohol content of 15.5 per cent by volume. As they age in barrel, they develop a layer of flor — a yeast-like growth that helps protect the wine from excessive oxidation. Those wines that are classified to undergo aging as Oloroso are fortified to reach an alcohol content of at least 17 per cent. They do not develop flor and so oxidize slightly as they age, giving them a darker color. Because the fortification takes place after fermentation, most Sherries are initially dry, with any sweetness being added later. Wines from different years are aged and blended using a solera system before bottling, so that bottles of Sherry will not usually carry a specific vintage year and can contain a small proportion of very old wine.

Because these wines were being paired with specific dishes, we did not taste them blind.

1. Pedro Rodriguez e Hijos “Don Benigno” Fino ('fine' in Spanish) is the driest and palest of the traditional varieties of Sherry. The clear, pale gold wine had a yeasty, almond nose. The palate provided hazelnut and almond nuttiness with a tangy, herbal - maybe tamarind - slightly bitter finish. I was surprised at how much I liked the wine, especially when paired with food. Who knew? 15% alcohol. $8.99 at Total Wine & More. Paired with charcuterie: Iberico cheese, various 'jamons', Marcona almonds, olive tapenade, artichoke heart/red pepper tapenade, crusty bread.

2. Lustau Solera Reserva Manzanilla “Papirusa” Very Dry/Muy Sec - Manzanilla is an especially light variety of Fino Sherry made around the port of Sanlúcar de Barrameda. Clear, pale gold like the Fino with similar nuttiness in the nose, but softer with elements of wood, cedar, and sage. I tasted cola in the mouth leading to a nice, slightly bitter finish tasting of almonds. 15% alcohol. $13.99 at Total Wine & More. Paired with the above charcuterie and leading into the next wine.

3. Sandeman “Character” Medium Dry Amontillado slightly rounded with Pedro Ximenez - Amontillado is a variety of Sherry that is first aged under flor but which is then exposed to oxygen, producing a sherry that is darker than a Fino but lighter than an Oloroso. This clear, light caramel wine was slightly sweetened with PX giving it a nutty, slightly sweet coffee and maple syrup flavor.17.5% alcohol. $12.99 at Total Wine & More. Paired with paella "pancakes" with aioli. I think it would pair well with Stilton as well.

4. Lustau Oloroso Solera Reserva “Don Nuno” Dry/Seco - Oloroso ('scented' in Spanish) is a variety of Sherry aged oxidatively for a longer time than a Fino or Amontillado, producing a darker and richer wine. With alcohol levels between 18 and 20%, Olorosos are the most alcoholic Sherries. This deep caramel-colored wine was dryer than the Amontillado with a toasted hazelnut character. 20% alcohol, but didn't seem that high - really well-balanced. $20.99 at Total Wine & More. Paired with lentil/onion/calamari stew in a Tempranillo reduction. It was as close to perfect as one can get.

5. Lustau Solera Reserva Palo Cortado “Peninsula” - Palo Cortado is a variety of Sherry that is initially aged like an Amontillado, typically for three or four years, but which subsequently develops a character closer to an Oloroso. Clear caramel provided a buttery caramel nose followed by palate that reminded some of us of Bourbon. 19% alcohol. $22.99 at Total Wine & More. Paired with 3-cheese tartlet. The 3 cheeses were Manchego, goat cheese and Cabrales with parsley and a dab of quince jelly. I wanted more, but restrained myself.

6. Lustau Solera Reserva Pedro Ximenez “San Emilio” Very Sweet/Muy Dulce - Jerez Dulce (Sweet Sherries) are made either by fermenting dried Pedro Ximénez (PX) or Moscatel grapes, which produces an intensely sweet dark brown or black wine, or by blending sweeter wines or grape must with a drier variety. Deep dark brown in color, coffee and toast in the nose, coffee, caramel, cola, syrup and figs on the palate. We thought it would be a perfect breakfast wine, but when paired with Xochitl's marzipan/fig bread pudding, it was almost an out of body experience.17% alcohol. $23.99 at K & L. 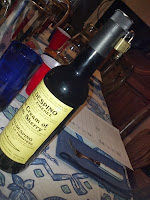 7. Valdespino Pedro Jimenez Cream Sherry - This was a bonus wine that JD and I had in our cellar since 2005. Just the perfect way to end a perfect tasting. Chestnut brown color with caramel and prunes in the nose. Cream Sherry is a blend of several Olorosos plus concentrate or 'rectified' grape must. The creaminess softens the alcohol, making it a perfect dessert wine. 18% alcohol. We purchased it from the former Cambria Wine Shop (now Madeline's) back in 2005. No idea what it cost. And we loved the packaging. Note the padlock.

So ended our Sherry tasting with all the Wineaux present - Xochitl, Debra, Barbara, Rico, JD, and yours truly - astonished at a truly diverse and tasty experience!
Posted by Goddess of Wine at 7:04 PM