September being the month of both Rosh Hashanah and Yom Kippur this year, the Goddess of Wine thought it might be nice to taste the wines of Israel. Viticulture has existed in Israel since biblical times. In the book of Deuteronomy, the fruit of the vine was listed as one of the seven blessed species of fruit found in the land of Israel (Deut. 8:8).

The location of Israel along a historic wine trading route between Mesopotamia and Egypt brought winemaking knowledge and influence to the area. Wine played a significant role in Judaism with images of grape growing, harvesting and winemaking often being used to illustrate religious ideals. In Roman times, wine from Israel was exported to Rome with the most sought after wines being vintage, dated with the name of the winemaker inscribed on the amphora. In the 7th century, the Islamic conquest of the Middle East virtually wiped out the region's wine industry with wineries closing down and vineyards, planted with now lost indigenous grape varieties, pulled out. Winemaking was temporarily revived in the Crusader states from around 1100 to 1300 but the return of Islamic rule and the subsequent Jewish Diaspora extinguished the industry once again.

The modern Israeli wine industry was founded by Baron Edmond James de Rothschild, owner of the Bordeaux estate Château Lafite-Rothschild. Today, there are five vine-growing regions: Galilee, including the Golan Heights, the region most suited for viticulture due to its high elevation, cool breezes, marked day and night temperature changes and rich, well-drained soils; the Judean Hills, surrounding the city of Jerusalem; Shimshon (Samson), located between the Judean Hills and the Coastal Plain; the Negev, a semi-arid desert region, where drip irrigation has made grape growing possible; and the Sharon plain near the Mediterranean coast and just south of Haifa, surrounding the towns of Zichron Ya'akov and Binyamina, which is the largest grape growing area in Israel.

I was joined by Wineaux JD, Rico, Barbara, Shawn, and Xochitl, who also fed us. This time, JD and I bought the wines with the group sharing the cost. They were tasted blind. Here's what we found after the reveal:

Wine #1 - 2012 Yarden Sauvignon Blanc, Galilee-Golan Heights. The Golan Heights are still a hotly-contested region politically, but the wines coming from this high elevation, cool climate region are exemplary. We all loved this Sauv Blanc with its clear, slightly yellow appearance, its minerality and luscious stone fruits in the nose, and its citrus, pineapple and stoniness on the palate. Wow. Outstanding. $17.99 at Bevmo

Wine #2 - 2012 Barkan Chardonnay, Dan. The clear, water-like color gave way to nose that was kind of funky, in a sweat socks way. No fruit on the nose, although Rico said he smelled beef stroganoff - not something to be expected from a white wine. On the palate, it was thin and watery-tasting although there was a certain viscosity that made some of us think it might be Chard. It had a short, creamy finish with a spot of lemon, but we all found it kind of meh. Maybe it would have been better before the amazing Sauvignon Blanc? Only 12.5% abv, which was nice. $10.99 at Bevmo

Wine #3 - 2011 Golan Sion Creek Blend, Galilee. Surprisingly pale ruby in color with an earthy, funky nose, Shawn thought this might be Pinot, but Xochitl thought Sangiovese. It was actually Sangiovese, Syrah, Gamay Noir, and Pinot Noir. So we were all correct. On the palate, spicy chocolate and cinnamon with a dollop of juicy berries and lovely acid on the finish made Rico think of pastrami. I guess he was hungry. We found that the difference between the nose and the palate left it a bit disjointed, but it was still very drinkable. Pair with duck, pork, flatiron steak. $13.99 at Bevmo

Wine #4 - 2011 Ugav Cabernet 50/50 Sauvignon/Shiraz blend, Jerusalem Winery in the Judean Hills. Deep garnet in color, this blend had ocean-like minerality paired with gamy green pepper and eucalyptus. And candy. That's what Xochitl smelled and tasted. A nice white pepper finish suggested that we pair it with mushroom risotto. Overall, as Xochitl succinctly stated, "The foreplay was better than the finish." Shawn and I really liked it, terming it "a meal in a glass." $16.99 at K & L Wines

Wine #5 - 2010 Kadesh Barnea Cabernet Sauvignon with 10% Shiraz, Negev. Dark garnet and slightly cloudy in appearance. The nose was barnyardy, with oak and herbs and cedar giving way to a full-bodied dried cherry, cedary flavor with lovely cocoa on the finish. The mouthfeel made some of think it was Syrah. I'd be curious to taste other wines from the Rabat Vineyard. This wine needed a pepper-crusted filet mignon. Lovely. $18.99 at K & L Wines

Wine #6 - 2011 Yogev Cabernet Sauvignon/Merlot blend, Samson. Medium garnet clear color, with a perfumed, berry nose. On the palate, lots of berries, cherries and chocolate/mocha. Good texture, nice tannins. This was the highest alcohol wine of the evening at 14%, and it was a little hot on the nose. Nothing to pair with this but steak. Very nice. $16.99 at Total Wine & More

Xochitl provided us with a wonderfully aromatic and tasty roasted lemon chicken breast with eggplant and feta risotto, pitas and soft Italian bread to sop up the lemony sauce. Oh my.

It was a very interesting evening, with lots of discussion about what makes a wine kosher or not, and raised the question: What did Jews in Europe and other parts of the world use for kosher wine prior to World War II? Everyone makes fun of Manischewitz, but that wine came out of need in the USA using available materials, specifically the vitis labrusca grape, which needs sugar to make it palatable. More research!!

Thanks to Xochitl for hosting, thanks to Shawn for correcting my Hebrew pronunciation, and thanks to everyone for a great evening! Next month we return to the US for a taste of Anderson Valley AVA wines. 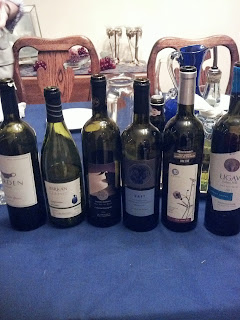