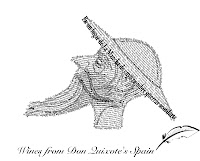 Yes, once again, the Goddess of Wine had to go to the earth job while First Acolyte, JD, tasted his way through a selection of excellent wines...Here is his account of the Wines from Castilla-La Mancha Grand Tasting at the Bazaar by JoséAndrés located at the SLS Hotel Beverly Hills on Thursday, June 6, 2013:

Castilla-La Mancha is the largest Spanish wine region with over 1,240,000 acres under vine divided into 9 D.O.’s (Denominaciones de Origen or Wine Appellations) plus the surrounding Castilla areas in the center of Spain. They have taken as their symbol the great literary figure of Don Quixote de la Mancha with a slogan of “Wines from Don Quixote’s Spain.” This area is mainly a vast expanse of flat, dry land with the temperature extremes of a continental climate. There is a lot of sunshine but limited water, necessitating dry farming.

This was the last stop of a three city leg of the 2013 US Tour. Many of the people flew out that evening back to Spain, some for quick turnarounds to then go to other places in the world. This is besides communicating to their companies at odd hours while on the road. These are some not quite so glamorous and quite fatiguing aspect of the wine industry.
I had no idea there was to be a seminar led by Karen MacNeil, wine educator, wine consultant and author of The Wine Bible, until I got the reminder of the event the day before. By then, alas, it was more than full.

At the grand tasting there were 25 wineries. As usual there was no way to try them all so I went to those that had unfamiliar grapes, what looked to be interesting blends, accessible without a solid block of people in front or wineries pouring something that a friend recommended. The tasting also featured cuisine from the Bazaar. Late in the tasting I managed to sample some very tender and rare beef and a creamy mixed-mushroom risotto. Delicious break accompanied by a fine La Mancha red.

I started with a tasting of the lineup of Bodegas Santa Cruz: Verdejo, Syrah, Garnacha. It was a nice overall view of area wines and got my ear attuned to the accent of the day. Mostly.

Bodegas Yuntero. A cooperative of winegrowers founded in 1954. A pleasant Macabeo. Epilogo Blanco 2012 blend of Sauvignon Blanc and Moscatel with cat pee nose and a sharp acid taste. Mundo de Yuntero Blanco 2012 blend of Airen, Macabeo and Verdejo, very crisp easy-drinking wine. Would be nice to sip on a patio this summer.

Bodegas Olcaviana. Vega Pasión Blanco 2012 - Sauvignon Blanc and Macabeo. 1564 Blanco 2012 blend of Viognier, Chardonnay and Riesling. To me sort of fuzzy peach notes, very fresh and delightful. Good sipper. I returned later for the reds. There was an earthy, hot Tinto, and organic Verdejo (a white that Ramón forgot to pour earlier, glad he remembered), a Tempranillo / Syrah blend with heat yet smooth end. The 1564 Laude blend of Cabernet Sauvignon / Petit Verdot / Tempranillo / Merlot. The two 1564 blends were multi-level delights. I do hope they get distribution. A most enjoyable lineup.

Bodegas Verduguez. Quite a few different lines offered, some organic, located in the Toledo province and built in 1950. Their offerings range from inexpensive table wines on through to premiums. Several sparkling wines: bruts and a slightly sweet rosé. Nebbia Verdejo 2011 with a nice acid bite finish. Imperial Toledo Sauvignon Blanc 2012- fresh cut grassiness. Easy summer sipping. Vereda Mayor Rosé of Tempranillo 2012. From their Coeli table-wine group was a light Sparkling Gold Flakes 2011. Not a sparkling wine but it contained real gold flakes! I wish I had been able to make it back to for their reds, because the whites and rosés I sampled were great fun.

Finca Los Alijares. A 2012 Viognier with a light nose and a fruity, almost thick textured mouth. A 2011 Garnacha-Petit Verdot blend that was rich with a medium tannic finish, two 100% Gracianos and semi-sweet Moscatel that would be a fine dessert.

Finca La Estacada. Currently only available on the east coast, there were several wines here that need to come west. I sampled a selection of reds ranging from a six months in American oak Tempranillo through a 2007 Tempranillo-Cabernet-Merlot-Syrah blend to a 2010 Syrah-Merlot blend with a light bacon nose. If their whites are on a par, they all need to come west so we can sample at our leisure.

Dominio de Punctum Organic and Biodynamic Wines. Viento Aliseo, Cabernet Sauvignon 70% / Graciano 30%. One done in stainless steel only and one with some time on oak that was smoother with the sharp edges knocked off. A floral quality, nice fruitiness, decent tannic finish.

Finca El Refugio. One of the wineries to be pouring at a Spanish Cinema event the next night at the Egyptian theatre in Hollywood. I sampled: a Legado Cabernet-Merlot that smelled a bit vegetal, a Tempranillo Roble with rich fruit and a tannic finish, their Petit Verdot, very fine with balance and delicious fruit and a funky-nosed Syrah with rich fruit taste. These were all 2011’s and quite enjoyable.

Casa Gualda. Plus Ultra 2011, a blend of 85% Petit Verdot and 15% Bobal, the third most planted variety in Spain. Having a chance to sample a number of delicious Petit Verdots this day, I thought the Bobal added a bit of a tannic kick. Seleccion CJ 2008, 100% unfiltered  Tempranillo, medium sharp, “candied fruit and licorice” nose.

I know at least a number of the wineries were looking for importers and/or distributors. There were several that I hope find such so we can get their wine here. Share please.

So thanks again to the unquenchable JD for another delicious tasting! Stayed tuned for the Goddess' account of a delightful afternoon with Wes Hagen of Clos Pepe! Cheers!