Wining in Ventura County...It's not a back up plan...

After a short discussion about whether to clean out the office or go wine tasting, we agreed that we'd play on Saturday and clean on Sunday, so off to Ventura we went. Our goals for the day: Drop off a bottle of JD's own newly-bottled experiment (tentatively named 'ZinDickTive') to friend and consultant, Gary Stewart at Four Brix, check out new winery, Plan B Wine Cellars, and finish up at old fave, Cantara Cellars.

After a laborious drive - unusual for a Saturday - we arrived at Four Brix and were delighted to find the Stewarts, Gary and Karen, manning the tasting room counter. We caught up while we tasted. The topic of Plan B came up - the Stewarts told us we had to go there, and were happy to hear that it was already on the agenda. After tasting through the lineup, and getting some special tastes of not yet released wines, we took the under-five-minute drive to Plan B.

Plan B Wine Cellars is the brain child of married couple Marlow and Janis. Marlow worked at Cantara for a few years side by side with Mike and Jesse Brown, and learned his craft well. They source their fruit from Santa Barbara County to Paso Robles. JD and I were very impressed with these wines, all really well-made and very tasty. The tasting room - another industrial park setting - was charming, and it was hopping! Lots of happy tasters. 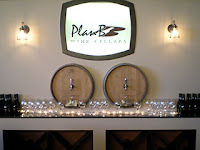 2010 Mourvedre, Happy Canyon - On the nose, a bit of barnyard funk. The first sip was a bit sour, but after a few minutes in the glass, the very young wine opened up and smoothed out with cherry cola on the long finish. Surprisingly low alcohol at only 12.6%. $28

2010 Story Line Shiraz - This accidental blending of two separately aged lots of Syrah from different vineyards turned into a great story and a tasty wine. Smoky, funky and yummy, we found ourselves craving grilled lamb. 13.1% alcohol. $28

2010 Valley View Syrah - This is their 'big' wine. Big, fruity, smooth and tasty. This wine has some nice tannins and could stay in the bottle a bit longer. Janis and Marlow suggest that you pair it with dark chocolate, but I still found myself thinking about meat. 15.1% alcohol. $36

Marlow told me that they've got Petite Sirah, Zinfandel and Cabernet coming in 2013, and I look forward to tasting them again. We left with a bottle of the Grenache and the Story Line, wishing we could have stayed a bit longer. 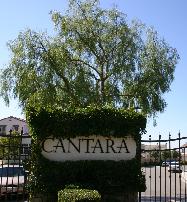 Onward to Cantara! We were initially disappointed that Chris and Mike Brown weren't there, but it turned out that their son Jesse, and tasting room enthusiast Sue were holding down the fort, and we had a wonderful visit as we tasted through the lineup that had changed just a bit since Debra and I were there in January. Cantara's wines are primarily from family holdings in the Lodi appellation. Highlights of the tasting:

2009 Cabernet Franc, Lodi - This wine runs the gamut of flavor from blackberry to tobacco, pepper, milk chocolate, violets, and licorice. The long finish has nice, round tannins. 100% Lodi Appellation. 14.9% alcohol. $32

We headed towards home, deciding to stop at Gary Bric's Ramp in Burbank - because we still wanted red meat, and the Ramp is the place to go!  On the outside, an unremarkable appearance right next to the onramp to the 5 Freeway on Hollywood Way. Inside, a modest hodge-podge of added-on rooms and old-fashioned comfort. Oh yeah, and great food. 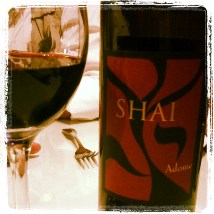 We both went for the Petite Filet Mignon and paired it with our go-to wine, 2009 Adome from Shai Cellars. As we were leaving, we stopped in the parking lot to chat to owner and Burbank mover and shaker, Gary Bric. Gary hoped we enjoyed our wine - since we brought it ourselves! - and I gave him Shawn's card and told him he needed it on the wine list. It could happen!

Now - onto cleaning the office! Cheers!