Wineaux of the Goddess - Greek Edition 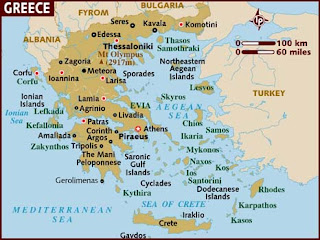 This year being the exploration of world wine regions, the monthly meeting of the Wineaux of the Goddess happily discovered that thousands of years of grape cultivation and winemaking experience create delicious, food-friendly, low-cost - and low-alcohol - wines. Because these grapes were all new to us, we did not taste them blind. We started with the white wines in order of vintage, and followed suit with the reds.

The origins of wine-making in Greece go back over 6,500 years, and evidence suggesting wine production confirms that Greece is home to the second oldest known grape wine remnants discovered in the world, and the world’s earliest evidence of crushed grapes. The spread of Greek civilization and their worship of Dionysus, the god of wine, spread Dionysian cults throughout the Mediterranean areas during the period of 1600 BC to the year 1. Hippocrates used wine for medicinal purposes and readily prescribed it. Greek wines and their varieties were well known and traded throughout the Mediterranean. The Ancient Greeks introduced vines such as Vitis vinifera and made wine in their numerous colonies in Italy, Sicily, southern France, and Spain. The Vitis vinifera grape which thrives in temperate climates near coastal areas with mild winters and dry summers adapted well and flourished in the Northern Mediterranean areas.

1. 2010 Greek Wine Cellars Assyrtiko from Santorini - Clear, straw-colored. Great minerality on the nose, with a clean, citrusy salinity. Xochitl said she smelled fish. On the palate, bone dry with nicely balanced acidity and soft peach on the mid-palate. Pair with oysters and other cold seafood. Very crisp and refreshing. 12.5% alcohol. $13 at Total Wine & More.

2. 2011 Sigalas Assyrtiko from Santorini - Another clear, straw-colored wine, but it could not have been more different from the first. The nose held something rich and buttery, but not oak - maybe full malolactic conversion? Viscous and somewhat oily in the mouth, full of tropical fruit, quince and white pepper on the finish. Delicious! It cried out for lobster. 13.7% alcohol. $20 at the Wine House.

4. 2009 Boutari Kretikos Red Blend from Crete - Our first red of the evening was a blend of the Kotsifali and Mandelaria grape varieties. Clear, medium red in color, it resembled a Pinot Noir or Grenache, but on the palate it was not like either. Cherry and strawberry on the nose was overshadowed by the smell of copper - Michelle's first sniff and reaction was "Smells like metal!" and she was right. After some discussion about fixing VA (volatile acidity) with copper, it passed as the wine opened. Initially, there was some copper in the mouth, but as it opened we discovered that this very, very dry red wine had elements of dried herbs and long, aromatic finish. It paired really well with my chicken cacciatore. 13% alcohol. $12 at Total Wine & More.

5. 2006 Hermes Xinomavro from the Naoussa region of Macedonia - Clear, garnet color. The wine smelled...old...in a good way. Earthy, reminded Michelle of Italy and Shawn of France. I just thought it smelled great. In the mouth the tannins were quite firm, but as it opened aromas and tastes of baking spices, cloves, sweet cherry, and surprisingly, tomato, provided a truly complex experience. We all immediately wanted lamb. 12.5% alcohol. $11 at Total Wine & More.

6. 2008 Boutari Naoussa Xinomavro from Macedonia - Another clear red wine with dusty dark cherry on the nose. Firm tannins gave way to graphite and dust - this was a poor man's Rutherford! Michelle said "Me likee!" and we all agreed that we really wanted to pair this wine with grilled meat seasoned with rosemary and dill. 13.5% alcohol. $20 at Total Wine & More.

These are only a few of the wines that are found in Greece, and I was actually surprised that no one brought any Agiorghitiko from Nemea, which I've had a few times and really enjoyed. What this evening did create was the desire to taste more Greek wine! Our efforts to find Greek wines in the greater Los Angeles area resulted in the discovery that Total Wine & More (Northridge), K & L Wine Merchants (Hollywood) and The Wine House (Los Angeles) all have broad selections to choose from, all well-priced as value wines. Note that none of these wines was over $20, but all were delicious, very drinkable and food-friendly.

Next month may turn out to be Argentina. More on that soon! Cheers and thanks to Michelle, Xochitl, JD, Shawn, Rico, and Barbara.