Wining with the Wineaux of the Goddess...Pinot Noir... 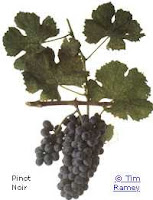 Got together for our monthly meeting of Wineaux of the Goddess at Fab's on 3/14 to do a blind tasting of Pinot Noir from all over the world. Turned out to be a very interesting and tasty evening!

Some basic info about Pinot Noir:
Pinot Noir is often described as being a difficult grape, to grow, to deal with in the winery, and to find truly great examples of, but fans are passionate about this variety, as sensually expressed by the dialogue between Miles and Maya in the 2004 movie Sideways. Difficulties plague Pinot Noir at every step, from propagation to its bottle-aging characteristics. Genetically unstable, the parent vine may produce offspring that bear fruit that is nothing like the parent's in the size and shape of the berry or cluster, and will frequently even have different aromas, flavors, and levels of productivity. There are 46 recognized clones (genetic variants) of Pinot Noir in Dijon, France. Experts estimate there are as many as 200 to possibly 1,000 clones of Pinot Noir worldwide. By comparison, Cabernet Sauvignon has only twelve identifiable clones.


The lovely Amelia bagged all the bottles for tasting, and then promptly forgot what was in each bag. In attendance were Amelia, Marya and Ralph, Debra, Shawn, Rico, JD, Xochitl, and myself. Our discoveries were enlightening. All wines were tasted blind and identified after we had judged them:

1. 2008 Louis Jadot, Burgundy - Clear, medium ruby color. The nose smelled of alcohol, clay, tobacco, lavender, and violets. Spicy, dried cherries, cranberries, chalk in the mouth, with firm tannins and a flat, mineral-rusty finish. We thought it would pair well with grilled halibut, foie gras with quince, or maybe some mushrooms. $15

2. 2003 Windward, Paso Robles - Clear, orange garnet; the words 'blood orange' were also used to discuss the color; the wine seemed young, with a pale rim. The nose was earthy, mushroomy with dark fruit and violets. Tasters also found some barnyard-y, underbrush characteristics along with cardamom and orange peel. In the mouth black cherry cola, blackberries, pepper, mace, with a slightly bitter smoky, spicy, rosemary-ish finish. We wanted to pair it with bacon donuts. Yes, bacon donuts. We liked it alot - and most of us thought it was Old World. $30

3. 2010 Laetitia, Mt. Eden Clone, Arroyo Grande - Clear, pink-edged ruby leaning to purple color. The nose smelled smoky like a Syrah with some cherry, some sarsparilla (root beer), and young tree bark. We won't discuss the jokes about saplings. On the palate, root beer, tea, lots of tannins and high alcohol. We thought this might pair well with pizza.

5. 2007 Domaine Serene, Willamette Valley, Oregon - Clear garnet color. Alcohol, vanilla, red currants, brown sugar, cranberries in the nose. Someone said "pie in a glass." The palate displayed firm tannins, cherries on the front, white pepper on the end, with some root beer and rhubarb characteristics. Ralph and Debra liked it; the rest of us not so much. We agreed it was pretty well integrated and would pair well with junk food. $30

6. 2008 Framingham, New Zealand - Clear garnet color. The nose was redolent of poo-poo (not my word!), barnyard, bright fruit, raspberry, rosemary; it was stemmy and cedary, and Rico smelled yeast and bread - specifically challah. In the mouth it was also stemmy, with overtones of cooked veggies, white pepper, cooked broccoli (thanks, Ralph!), dried cherries. Amelia said something about snickerdoodles, but...We all agreed it didn't need food, and despite all the strange descriptions, we all really liked it. $25

7. 2010 Anakena, Chile - Clear garnet color. Earthy, herbal - well, it actually smelled like cannabis. I believe 'ganja butter' was the term used. There was eucalyptus, menthol, mint, cardamom, and a marine, kelpy smell. The wine tasted of minty cherry, menthol, spearmint, tobacco, leather, with a long cherry cola finish. We all liked it. $10


8. 2008 Casa Dumetz, Malibu - Earth, alcohol, deep herbal quality, and interestingly, pastrami and green olives in the nose. In the mouth, again pastrami, with a salty, pickled quality. And those green olives. It reminded some of us of pickled watermelon or Jolly Rancher candy. There was discussion as to whether or not these were true characteristics of the wine or was it flawed. We all liked it, although there was a lot of discussion, especially once the wine was revealed, especially due to the region's proximity to the ocean. It paired really well with the Italian food we had after the tasting.

Marya also brought a gorgeous Melville Pinot from the Santa Rita Hills - just to get another region in there - but we didn't evaluate that during the tasting; just enjoyed it with our meal. 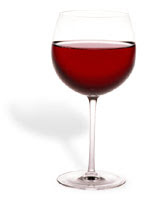 And stay tuned for an announcement of a new class - open to the public - in April!
Posted by Goddess of Wine at 10:50 AM