Wining in Thousand Oaks and dining in Westlake...

We were supposed to meet Marya at the Cornell Winery at 10 a.m. on Father's Day, but Saturday evening brought an email canceling the date due to illness.  So we slept in a bit, made coffee, read the paper, and suddenly felt that we really needed to get out of the house. 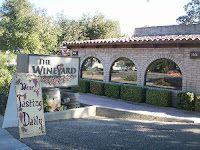 So we showered and dressed, grabbed a handful of peanuts to stave off the pangs, and headed north to Thousand Oaks.  Specifically, The WineYard, a charming wine bar and store, and the official tasting room for Four Brix Winery.  We had met Steve and Laura Simonsgaard previously, and liked them and their wines, and wanted to know more about them.

After a somewhat challenging drive up the 101 - Sigalerts on Sundays just don't help - we pulled into the parking lot for the WineYard, and were welcomed by Larry, the man behind the bar.

Sundays, the WineYard pours tasting flights of Four Brix. The winery is a labor of love for the Simonsgaards, who lend their great palates to the direction of the wine.  They have partnered with their friends, the Stewarts and the Noonans to make wines about which they are passionate.  Garagistes in the best sense!

2008 Zeductive - 79% Zinfandel/21% Petit Sirah, 14.2% alc.  Nothing petite or nuanced about this wine.  Big, big, big, jammy, opaque, and a surprisingly alcoholic nose.  I questioned Larry about the decision to pour this wine first, and he said that was how he had been instructed by the winery, and he liked it that way.  JD and I both felt that it needed decanting or maybe more time in the bottle.  We just weren't that happy.  $28

2008 Rhonedezvous - Grenache/Syrah/Mourvedre/Counois - A fairly heavily extracted wine, it was nonetheless a relief after the Zeductive.  Deep, dark, meaty, smoky, with some raspberry and nutmeg after it had been in the glass for a while. $35

2008 Scosso - 62% Sangiovese/25% Cabernet Sauvignon/13% Merlot - Another big, highly extracted wine, and yet much more palatable than either of the first.  We liked it, felt it was food ready.  Bought a bottle.  $35

At this point, Steve and Laura showed up.  We reintroduced ourselves - thankfully, they remembered us! - and we jumped into a really fun discussion about wine making, their wines, other wines, wine events...you get the picture.  Part of the conversation included the serving order of the wines - we all had different opinions, even the winemakers!

As we chatted, Steve remembered that he had an open bottle of their 2009 Smitten, a blend of 64% Viognier and 36% Marsanne.  Larry pulled out some fresh stemware, poured this really lovely white.  Of all the wines we tasted, we were smitten with the Smitten!  However, Larry didn't have any to sell, so we'll get it another day.

The Simonsgaards left to go do some blending, we finished up our tasting and headed south-ish to find food.  Headed over to Westlake to give a second try to Zin Bistro Americana, an eclectic restaurant on the lake in Westlake.  We had eaten there before, and had been impressed with the food, but the prices were higher than we were prepared for, and the service was kind of snooty.  Still, we figured we'd give it another shot - and be more prepared this time.

Preparation made the difference.  The hostess was gracious, the waiter was snooty until he saw I was taking notes, and then got warmer, and the food was excellent.  A serving of chilled gazpacho was delivered - gratis.  It was refreshing and went well with the fresh baguette and sweet butter.

JD ordered scallops on a bed of risotto with a Zinfandel reduction, and I ordered a boneless chicken - a whole one! - with garlicky fries and a Kalamata olive dipping sauce.  Yum and yum!

How they got all the bones out of a chicken I'm not sure I want to know!  Half of it will make a lovely meal tomorrow!

After tasting the Four Brix wines at the WineYard, we decided that we wanted something a bit lighter to go with dinner, and chose a 2006 Louis Jadot Red Burgundy (Pinot Noir) as an accompaniment.  At $40, it was just about the cheapest wine on the list, which is aggressively marked up.

To finish it off, we shared an apple tarte tatin, an upside-down apple tart in which the apples are caramelized in butter and sugar before the tart is baked.  It was served with a dollop of vanilla bean ice cream and another dollop of creme fraiche and some berries.  Delish!

Sated, we made our way home, happy at making some new friends, drinking some lovely wines, and grateful for our shared experiences.

Cheers!
Posted by Goddess of Wine at 8:44 PM