Well, it seemed as if it were going to be a nice event - that turned out to be somewhat of an understatement.


Union des Grands Crus de Bordeaux, presented by Wally's Wine, with some coordination and staffing by LearnAboutWine, at the Annex at Wolfgang Puck at Hollywood and Highland.  OMG.  This was an extraordinary opportunity to taste the 2007 Bordeaux from almost every region. 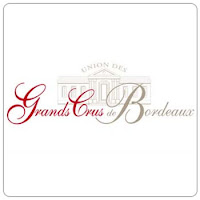 JD and I decided that trying to get to Hollyweird on a Wednesday evening, when Wally's had already sent out an email warning about traffic issues and parking, was going to be too difficult.  So, we drove to the North Hollywood Metro station at Lankershim (a mere 2 miles from the house), and subwayed it to Hollywood and Highland.  Studying the directory in the courtyard revealed the location of the Annex.  Stepping away from the directory revealed Marya, who had also arrived early.

We trooped upstairs to discover the final set up going on.  Ian's team of volunteers, plus his regular staffers Laura and Caleb, were busy getting the check-in tables ready, the Wally's folks were putting the finishing touches on the tables loaded with literature and glasses (supplied by Riedel, of course).  We hung around and chatted - Marya had done a bunch of research in prep for the event, and had her tasting strategy mapped out.  Birthday girl Debra B. and her friend Laurie (sp?) arrived, Ian gave the OK, we grabbed our glasses and tasting books and headed to the far side of the room to taste the 2007 Margaux.

Some highlights of the 30 wines (out of over 80) we were able to taste:

Château La Conseillante - Pomerol - just a gorgeous wine, will be even more amazing in another 10 years

Château Beaumont - Haut-Médoc - graphite in the nose, satiny tannins in the mouth

Château Dauzac - Margaux - I'm including this in 'highlights' because this was the first wine of the evening that had a serious barnyard/manure nose.  Which is a good thing!  Luckily, it didn't taste like cow poop!  Marya was very excited.  She rushed over to me and whispered, "Cowshit wine!"


Château Rauzan-Ségla - Margaux - Really liked this wine.  Soft tannins, slightly dusty, but with red fruit and chocolate beginning to emerge.  I'd like to taste this in another 5 years.


Château Haut-Bages Libéral - Pauillac - another nose full of manure, but the payoff was the chocolate and soft tannins in the mouth.


Château Climens - Sauternes - OMG.  This wine tasted of scotch-soaked apricots with a hazelnut finish.  It was extraordinary.  I went back for seconds.


These were just the highlights.  We tasted several others.  For me - besides the fun of tasting all these wines, most of which were new to me - was discovering how different from each other are the individual regions in Bordeaux.  Now this may not be big news to the knowledgeable - and I'm fairly in the know - but to be able to taste these different regions one after the other was truly enlightening.  It is always exciting to discover how hundreds of winemakers, using the same varietals, can create magically different flavors and aromas.


We also discovered some wines that didn't speak to our palates.  While our friends were rhapsodizing about some of the wines from Pessac-Léognan, we were not that thrilled.  Several of them smelled and tasted of jet fuel and kerosene.  To JD and me.  What can I say?

The event was only 2 hours long, definitely not enough time to taste all the wines - although many folks there were giving it their best shot.  We sadly gave up our glasses, decided to pass on the advertised 'after party' dinner at The Grill (prix fixe $49/person), and went downstairs to Trastevere Ristorante for some pizza, pasta and Sangiovese.  The service was friendly and relaxed, the food was excellent - JD and I shared a pizza Capricciosa with tomato sauce, mozzerella, mushrooms, black olives, marinated artichokes, and Italian ham for $14.95.  We took home half of it - it was full size!  And delish.  Deb and Laurie and Marya and Shawn (another friend we picked up along the way), all took home half of their food; the portions were that big!  Four of us shared a bottle of 2006 Nero d'Avola, ReNoto, Feudo Maccari (Sicilia) for $36, that was the perfect counterpoint to our evening of Bordeaux.

It was getting late, and we were all beginning to fade.  JD and I made our way back to the subway, waited a few minutes for the train back to North Hollywood, while musing on the similarities and differences between the LA Metro and the London Underground.  We were back in Burbank by midnight, and asleep shortly thereafter.  A wonderful evening, sharing wine and food and laughs with good friends.

Cheers!
Posted by Goddess of Wine at 1:19 PM